Margaritas, while delicious, aren’t necessarily sustainable cocktails in their most conventional form. The limes juiced to provide the drink’s sour component are typically tossed into the garbage immediately after being squeezed, leading to lots of waste destined for the landfill.

One way around this problem is to maximize the juice you get out of your limes and use every part of the fruit, including the peel.

Nickle Morris, a bartender and the owner of Expo in Louisville, Kentucky, has developed what he calls “Super Juice,” an ingredient that maximizes the amount of juice each lime can produce while also minimizing the amount that’s thrown away. First, he extracts the oils from the limes’ peels using an acid mixture, similar to the way sugar is used to make an oleo saccharum, and mixes the results with water. Then he juices the limes and adds the juice to the mixture. The process yields more than a liter of Super Juice with a mere 10 or so limes, essentially tripling the amount of juice produced versus what you’d get from juicing the same number of limes the conventional way.

The recipe for the Margarita itself comes from bartender and cocktail developer and writer Tyler Zielinski, who considers Morris’s concoction to be “a game changer” for making cocktails.  “The Super Juice can be shaken like ordinary lime,” he says. “It’s such a brilliant ingredient.”

Many Margaritas call for agave syrup as a sweetener, along with or instead of orange liqueur, and you can certainly feel free to use it in this one. In keeping with the drink’s sustainable ethos, however, you may wish to instead use honey syrup made with local honey so as to reduce the drink’s carbon footprint. And, of course, you should choose a tequila made employing best practices in terms of both social/cultural and environmental sustainability.

Note that the quantities provided below for the Super Juice will make enough for a party’s worth of cocktails. If you’re not making drinks for a gathering, however, you may want to reduce the quantities given by half or more.

*Super Juice: Add 120 grams of citrus peels (usually about 8 lemons or 10 to 12 limes), setting aside the peeled fruit to use later, with 45 grams of citric acid and 8 grams of malic acid into a container. Shake the mixture to ensure the acid mixture completely covers the peels, and let stand at room temperature for one hour. At that time, a liquid will begin to collect at the bottom of the container. When that happens, add 1 liter of cold water to the mixture and blend with an immersion blender. (Do not use a bucket blender, since you don’t want any heat transfer.) Strain the mixture through a cheesecloth or superbag, discarding the solids, and bottle. Then, juice the same limes and combine the juice with the oleo citrate mixture. This mixture will keep, tightly sealed and refrigerated, for about 3 to 5 days. 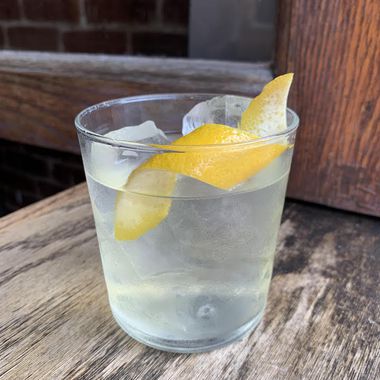