Caroline Hatchett
Caroline Hatchett is a writer, editor and podcast host specializing in food, beverages and hospitality. She is based in New York City.
Learn about Liquor.com's Editorial Process
4 ratings
Add a comment

So-called “split-base” cocktails are nothing new in the bartending world. Bartenders have long been dividing the spirituous base of their cocktails between two spirits, or “splitting” the base. But the rise of doing so with gin or gin-like spirits is a relatively recent phenomenon.

“I’ve always loved using Barr Hill in a split-base cocktail, even with other types of gin,” says Sam Nelis, the beverage director at Caledonia Spirits in Vermont, which makes Barr Hill gin. “It has such a rich, round, botanical note from the use of raw honey that it comes through in cocktails even if it’s in a smaller amount,” he says. “It’s a great gin to share the spotlight in cocktails because it still finds a way to shine.”

As an example, Nelis points to this cocktail, created by Jeff Baumann at The Great Northern in Burlington, Vermont, in 2018. It splits the base between Barr Hill’s honey-tinged gin and genever, a spirit that’s often described as a cross between gin and whiskey. To this mix, he adds Cocchi Americano, an aromatized wine similar to a vermouth, with a citrusy and slightly bitter flavor, and a fruity and floral pear eau de vie. It’s all finished off with orange bitters and a few drops of saline to accent the complex flavors.

The resulting cocktail is clearly a relative of a Martini, but much more flavorful and complex. 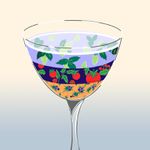 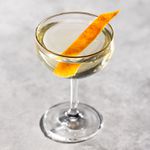 Gin Blossom
11 ratings
Rate This Recipe
I don't like this at all. It's not the worst. Sure, this will do. I'm a fan—would recommend. Amazing! I love it! Thanks for your rating!