From spicy blancos to rich añejos, these potent tequilas bring the heat.

Despite all the recent attention paid to low-proof drinking, there’s been an equal amount of focus on spirits that provide a boozy kick. Every category’s got them, and recent years have witnessed a slew of high-proof tequilas hit the market. Now, it’s time to celebrate them. These overproof tequilas include agave-forward blancos, oaky añejos, delicate cask-strength sippers and everything between. 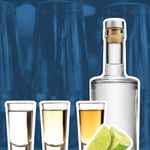