Launching a business during a pandemic may sound like a questionable idea, but a Miami bartender isn’t letting that stop him. Valentino Longo won Bombay Sapphire’s prestigious Most Imaginative Bartender Competition (MIB) in February 2020, just before the pandemic hobbled the hospitality industry. With the money awarded him for winning, he intended to launch Shōshin Art Club as an in-person members club to connect his local bar community and give its members a space to create, network and further their careers through education. But the pandemic challenged Longo to rethink his initial concept, moving the entire platform online.

Pivoting in a Pandemic

Longo gave his original business pitch for Shōshin at the 2020 MIB finals as one of the competition’s three challenges. He shared his ambitions for the club, its business plan and even the floor plan for the intended space.

Shōshin is a Japanese word that means “beginner’s mind” and encapsulates the Japanese concept that people should approach life with openness and without preconceptions—in other words, as a beginner. Longo spent a monthlong sabbatical in Japan in 2017, learning about the country’s cultural philosophies. “I wanted to pay homage to Japan by calling this project Shōshin with the hope of communicating this thoughtful concept to my fellow bartenders,” he says. “There is not a finish line when choosing this career; the industry continuously evolves, and we should keep in mind that the learning process is perpetual and we must uphold the beginner’s mind to enjoy the ride.”

For the initial concept, Longo envisioned a test kitchen where bartenders could research and develop recipes with colleagues, host master classes with some of the world’s top bartending talents, network with local colleagues and share creative passions with others in the industry. But nearly a month after Longo won and put his business plan into motion, his plans were ruptured by a global pandemic.

Longo had been checking potential locations in Miami for the club when the pandemic hit the U.S. “It all froze,” he says. “I stayed in a bubble for two, maybe three weeks, during which I saw all the businesses, including the Four Seasons Surfside where I work, closing their doors without knowing when they would be back.” But that’s when he realized that he could still make his plans happen by going virtual and even expand to a much wider audience. Even as the award-winning bar where he worked, Le Sirenuse at the Four Seasons Hotel at The Surf Club, shuttered its doors for good, he kept going, investing his MIB money into building the website and curating the talent for the virtual master classes.

He brought on Edinburgh’s Ladislav Piljar, Longo’s bar manager while he was tending bar at The Red Bar at Bam-Bou in London, as the videographer and content creator for Shōshin in Europe. Piljar has helped Longo create content featuring some of the best bartending talents on the continent, including Erik Lorincz of Kwant and Marian Beke of The Gibson. The curation of global talent has helped Shōshin’s audience evolve from local to global as well.

Longo's wife, Giorgia Crea, who’s also an experienced bartender and a former brand ambassador, has played a fundamental role in the business’ pivot by working with the web developer on the site.

Transitioning to a virtual-only business model had its hiccups, however. As Shōshin’s potential audience changed from local to potentially worldwide, Longo found it challenging to recalibrate the brand to have global appeal. “It gets difficult explaining the same concept when talking to so many different cultures and also making it accessible to everyone,” he says. “We’re working on this point to break down the barriers to make Shōshin accessible to everyone.”

Capturing the video content was another challenge for the team. “It definitely was not easy to curate the content with the pandemic and the restrictions,” says Longo. Each shoot usually involves the bartender “mentor” plus a videographer, usually Longo or Piljar, with each person wearing masks (except for the mentor while recording) and maintaining distance. “Filming locations were another issue, because many of the mentors felt important to be recorded in the bars where they work,” he says. “But many of the bars, especially the ones in hotels, were not accessible until recently.”

Those who are familiar with the online education platform MasterClass will find Shōshin Art Club is similar. It’s separated into categories including leadership, mentorship, technique and product knowledge, with new courses to be added to the platform each month. Current courses include “The Magic of Directing,” hosted by Declan McGurk, who until recently was the bar director at American Bar at The Savoy; “Translating Your Heritage Into Cocktails,” hosted by the owner of San Francisco's Pacific Cocktail Haven, Kevin Diedrich; and “Beyond the Martini,” hosted by The Connaught’s Agostino Perrone. Each lesson feels like sitting at the bar with these seasoned experts and absorbing their wisdom, tips and guidance on each topic.

By late October 2020, the platform had gained 500 members since its launch a month earlier, which can be considered a success, considering it was marketed mostly by word of mouth and via its Instagram account. Membership is available in three tiers. While there are some free courses for those considering whether to make the membership commitment, the real value lies in the exclusive premium lessons, which cost $17 per month.

As for some of the new additions coming to the platform, “I’m very excited about Nick Bofill’s class,” says Longo. “He’s a renowned honey producer in Miami who talks about honey’s production and sustainability.” Bofill’s class will be added to a part of the site that can be accessed by nonmembers. “Another course I’m looking forward to is one taught by Iain Yanda Lazarus McPherson, the owner of award-winning Panda & Sons [in Edinburgh],” says Longo. “He digs into the ‘switch technique,’ which is the process of separating water from a spirit through freezing and switching it with another ingredient. It is one of the latest techniques in the bar industry and will be added to the technique category. I can't wait for it to be out!”

Although Shōshin didn’t turn out exactly how Longo had envisioned it, it’s quickly growing into a new educational resource for the bar industry. “In two to three years, I see Shōshin Art Club as a solid virtual source of knowledge and inspiration for the industry, with a global calendar of events and pop-ups, and in-person classes, as well,” Longo says. 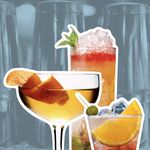