This bartender favorite is a fine sipper and mixer for the rest of us, too.

There are trendier bottles out there, but Rittenhouse Straight Rye Whisky has remained a bartender favorite for its versatility in cocktails and its complex spicy notes that make it a great sipping whiskey. Industry clout aside, it has a relatively gentle and sweet flavor profile that beginners will appreciate, too.

Palate: Quite fruity, with sweet dark berry and caramelized banana up front, followed by a hint of toasted marshmallow. The rye spice comes forward on the back of the tongue and is relatively subdued compared to what you’ll find in many modern-day ryes. Overall, there’s a very nice balance between sweet and spicy.

Finish: A moderate alcoholic kick on the swallow, with the caramelized banana notes lingering the longest. A bit of oak is present as well.

Nowadays, it seems like new bottled-in-bond ryes are coming out on a weekly basis from distilleries large and small. It’s easy to forget that until the mid-2010s, Rittenhouse was just about the only readily available option for those looking to try the style, which must be aged for at least four years and bottled at 100 proof. We have Kentucky distillery Heaven Hill to thank: Rye and bottled-in-bond whiskeys, both of which were hugely popular pre-Prohibition, were considered relics of a bygone era by the 1970s and ’80s. When Heaven Hill purchased Philadelphia distillery Rittenhouse and moved operations to Kentucky in the early ’90s, it managed to keep the torch at least flickering, if not burning.

Rittenhouse Rye Whisky (strangely enough, the company omits the “e,” which isn’t standard for American whiskeys) may have originated in Pennsylvania, but stylistically it’s more like a classic Maryland rye, containing the minimum required amount of rye (51%) in the mashbill. The result is a sweet, fruity flavor that’s at odds with the big, brawny Pennsylvania-style ryes that have dominated the category since WhistlePig (made in the high-rye Pennsylvania style, although its distillery is in Vermont) upended it in 2010. Even at 100 proof, it’s still comparatively delicate.

That doesn’t mean this whiskey is a shrinking violet in cocktails, however. Rittenhouse is still a favorite among bartenders—it’s a terrific go-to for Manhattans, Old Fashioneds, Sazeracs, or pretty much any whiskey drink old or new. Its balance of sweet and spicy notes also makes it a fine sipper, especially for newcomers to the rye category. The classic’s age, availability, and affordability give it a less-sexy reputation than the latest limited-edition ryes, and it tends to fly a little under the radar at times. But look behind any decent cocktail bar and odds are you’ll find a bottle of Rittenhouse there—and with good reason.

To be certified bottled-in-bond, a whiskey must be distilled entirely at a single distillery in one six-month distilling season; it must be aged at least four years in a federally bonded warehouse; and it must be bottled at exactly 100 proof.

Rittenhouse was around for decades before rye came back into fashion, and it’s still a favorite of bartenders for its versatility and mixability. It’s also an affordable and tasty sipper whose fruity, comparatively gentle flavor will appeal to rye newbies. There are sexier bottled-in-bond ryes out there, but Rittenhouse shouldn’t be overlooked. 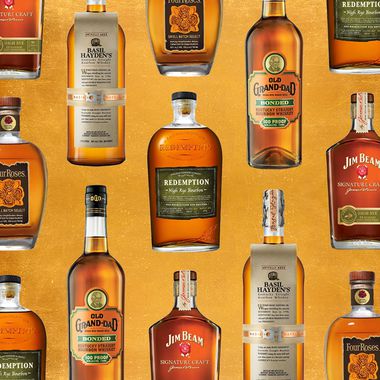