The Mint Julep is already a bonafide classic, an intoxicatingly refreshing blend of bourbon and mint over heaps of crushed ice. It’s so beloved and historic that it practically has its own holiday thanks to its ubiquity at Kentucky Derby parties, even those far away from the raucous crowds of Churchill Downs. However, one area that the drink doesn’t do as well with is large batches, as normally you’d need to individually build each Mint Julep. Bartender and author Jerry Nevins has the solution in his recipe book “Sloshies: 102 Boozy Cocktails Straight from the Freezer.” In the Whiskey Smashed small batch bourbon is mixed with citrus, sugar, water and mint for a slushy, frozen drink that doesn’t even require a blender.

The Whiskey Smashed starts with Woodford Reserve straight bourbon, a high end and well-regarded bourbon from Kentucky. It’s bold and assertive enough to stand up to the other ingredients, which includes more simple syrup than you might initially expect. It’s not only for sweetness, as the sugar content is also critical to getting the drink’s slushy texture right—if you use too little, the drink can become thick and frozen. Because of this, the recipe takes both simple syrup and a mint-infused sugar syrup; the latter can be used to give your traditional Julep or Mojito an even mintier flavor.

To avoid an overly sweet concoction, the Whiskey Smashed also receives lemon and lime juices, unlike your traditional Mint Julep—this tartness helps to balance the extra sugar. It also gives the drink some more liquid, as does a few ounces of added water which replicates the ice that normally goes into the Julep.

One major benefit to the Whiskey Smashed is that you can make it ahead of time—like before a Kentucky Derby party—and have it ready to go for when your guests arrive. It’s a fun, albeit less classic take on the famed race day libation. 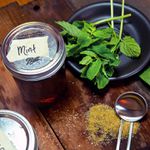