Tiki godfather Donn Beach opened his original Don the Beachcomber bar and restaurant in Hollywood in 1933, just as the American social scene was having a renaissance on the heels of Prohibition’s repeal. It was at this Hollywood institution that Beach created some of his most iconic cocktails, including the Zombie, which saw a mix of rums, absinthe and syrups blended together into a potent and delicious concoction. The drink spawned plenty of variations, and the Undead Gentleman is a standout of these. Shaken rather than blended and lacking a few of the Tiki syrups the original demands, it’s a bit easier to make and just as easy to drink.

Modern tiki icon Martin Cate developed the Undead Gentleman and printed the recipe in his cocktail book, “Smuggler’s Cove: Exotic Cocktails, Rum, and the Cult of Tiki.” The drink also draws inspiration from the Jet Pilot, another Tiki staple drink, borrowing its falernum (a lime-tinged spiced almond liqueur or syrup, in simple terms), grapefruit juice and a cinnamon simple syrup, rather than the Zombie’s Donn’s Mix. In fact, it could be argued that this drink is closer in DNA to a Jet Pilot, but we’ll let the Tiki nerds debate that one. In any case, its base is a mix of rums, including a full ounce of overproof 151 rum. This means it packs a serious punch, so temperance is encouraged when imbibing.

One major distinction of the Undead Gentleman is that rather than being flash-blended like its predecessors, it’s a shaken drink. This means you won’t even need a blender to whip up a batch for yourself and some friends. The glass gets a rinse of absinthe first, and you’ll want to stick to a clear absinthe rather than the more familiar green color to maintain the cocktail’s brilliant orange hue. 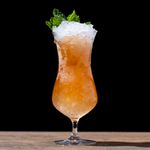 The Zombie Is a Tiki Hallmark
68 ratings

*Smuggler’s Cove cinnamon syrup: Put 2 cups of water in a saucepan. Add 3 halved 6-inch pieces of cinnamon stick to the water, and bring to a boil over high heat. Add 4 cups of granulated sugar and stir with a whisk (or an immersion blender) until dissolved, about 1 minute. The liquid should become clear such that you can see the bottom of the pot. Immediately remove from the heat. Cover and let sit at room temperature for 12 hours. Strain through cheesecloth into a bowl, and then use a funnel to pour into a lidded bottle or other sealable container. The syrup will keep, refrigerated, for several weeks. Makes 4 cups (32 ounces). 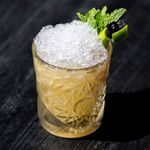 Jet Pilot
15 ratings
Rate This Recipe
I don't like this at all. It's not the worst. Sure, this will do. I'm a fan—would recommend. Amazing! I love it! Thanks for your rating!