When it comes to American cities who have put their mark on the global cocktail scene, it’s difficult to overstate the influence of New Orleans. The birthplace of drinks like the Sazerac, the Vieux Carré and the Ramos Gin Fizz, as well as bartending ingredients like Peychaud’s bitters, New Orleans has long been one of the top locales for cocktail innovation.

One example of New Orleans’ contributions to the cocktail world is the Brandy Milk Punch. Like many other drinks, its history is somewhat cloudy, but the place that claims to have created it doesn’t face many arguments to the contrary: Brennan’s in New Orleans’ famed French Quarter assumes responsibility for the drink’s creation. Its roots go further back, and versions of it appeared in Ireland prior to its popularity in New Orleans, but the restaurant has served its current iteration at brunch since the 1940s. Though not as renowned or ubiquitous as the city’s other essential libations, the Brandy Milk Punch is a staple of New Orleans brunch culture. Many residents of the city would even say that it’s not truly breakfast at Brennan’s without a Brandy Milk Punch in hand.

Much of the beauty of the drink lies in the simplicity. It’s a straightforward blend of milk, brandy, vanilla extract and powdered sugar. They are blended together and served over crushed ice for a creamy, frosty morning pick-me-up that packs a decent punch with two ounces of brandy in each glass. Generally, it’s made in larger batches that serve four; the drinks should be tasted for sweetness and adjusted with more powdered sugar if needed before serving. A gentle dusting of freshly grated nutmeg over the top finishes the drink.

While the base spirit is right there in the name, there are variations that see bourbon used instead of brandy. Feel free to use whatever spirit you prefer, but it’s best to stick to the darker categories. 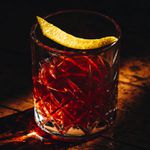