It might not be as iconic as the Mai Tai, nor as potent and indulgent as the Zombie, but the Three Dots & a Dash is as essential to Tiki bartending as any other rum-, syrup- and juice-filled concoction. Donn Beach himself, one of the two grandfathers of the Tiki movement, crafted this drink during World War II. Its name refers to the morse code for the letter V, or Victor; more meaningfully, though, it stood for “victory” for the Allies in their fight against the Axis.

Like many other Tiki drinks, the exact recipe has been altered and adapted over the years. This version comes from Martin Cate, owner of San Francisco’s famed Tiki bar Smuggler’s Cove and all around Tiki expert. Also like many other Tiki drinks, this one uses a mix of rums, starting with rhum agricole. Specifically, Cate uses AOC Martinique rhum agricole vieux at Smuggler’s Cove, which is darker than many other rhum agricoles. A blended, aged rum also goes in the drink, the specifics of which are flexible.

For the syrups, it’s a blend of St. Elizabeth allspice dram for complexity and baking spice notes, John D. Taylor’s Velvet Falernum for rich nuttiness and honey syrup for sweetness. It also gets lime and orange juice, with Angostura bitters rounding out the ingredients.

One element of the drink that Cate is very specific about is the way it’s made, with a process referred to as “flash blending.” This entails using a stand-up blender, similar to a milkshake blender, and filling the mixing vessel with crushed ice and a few larger ice cubes called “agitator cubes.” It’s then quickly blended and the entire contents are poured into a glass, save for some of the larger chunks which are strained out. Those making this at home without the luxury of the particular kind of blender can shake the contents of the drink and strain it over crushed ice, or use a regular blender, briefly pulsing the drink with ice cubes until the desired consistency is achieved.

Of course, as with any respectable Tiki drink, the garnish plays a major role. But unlike many others, this one is a bit complex: three cherries on a pick, which represent the three Morse code dots, and either a pineapple chunk or a pineapple frond that represents the dash. When selecting the maraschino cherries that top the drink, be sure to grab ones of decent quality like Luxardo’s cherries. This is not the time or place for using the familiar electric-red, artificially sweetened and preserved maraschino cherries from the Shirley Temples and ice cream sundaes of yore. 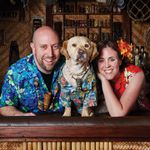