Normally, when considering the wide world of Tiki drinks, you’ll think of rum, as the spirit dominates the scene with its Mai Tais and Zombies. Surprisingly, the second most common spirit seen in these faux-tropical drinks is probably gin, and the most famous of these gin-based Tiki cocktails is the Saturn. Though it uses the juniper-based spirit, it also includes many of the hallmarks of Tiki bartending: fresh juices, multiple syrups and a complicated, interesting history. It “carries the regality of a Mai Tai with the drinkability of a Tom Collins,” according to Garret Richard of New York City’s Slowly Shirley and The Happiest Hour.

California bartender  J. “Popo” Galsini introduced the Saturn to the world in 1967 when he won the International Bartender’s Association World Championship with it. Originally he titled his gin creation the X-15 after an American rocket plane, but shortly after doing so one of those planes crashed, killing its pilot. Reportedly, Galsini changed the name of the drink to the Saturn for the competition, in honor of the Saturn rocket that propelled the first Apollo rocket flight into space, months after the fateful X-15 crash.

Galsini’s storied history involved decades at multiple bars in California, mainly tropical-themed ones during the style’s mid-century heyday. However, his invention would have likely remained lost to the annals of time were it not for serendipity: historian and Tiki specialist Jeff “Beachbum” Berry happened upon a commemorative glass at a thrift shop in Southern California. He didn’t buy it, but he did copy the outline of the recipe down, and would later publish it in his 2010 recipe book “Beachbum Berry Remixed.”

As for the drink itself, it’s understandable why it’s become a mainstay on Tiki menus. Despite starting with gin, the drink is very much in the category thanks to the inclusion of sweet-tart passion fruit syrup and the rich, nutty flavors of falernum and orgeat. But even with three different syrups it’s not too sweet, thanks to the bitterness of gin instead of the inherent sweetness of rum. Also like many drinks under the paper umbrella of Tiki, the Saturn is served as an icy blended drink, making it extra refreshing and enlivening. With its edible flower garnish, it’s a striking drink to behold. 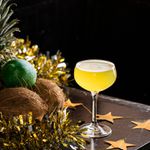