The Holland House cocktail is a classic drink containing genever, dry vermouth, fresh lemon juice and maraschino liqueur. Well, to some people. Others contend that it actually features dry gin, while some claim that it’s a rye whiskey drink. In the strange way that occasionally applies to cocktails, all of these recipes are right.

The first known printing of the Holland House was in George Kappeler’s 1895 book, “Modern American Drinks: How to Mix and Serve All Kinds of Cups and Drinks.” His recipe called for rye, triple sec and bitters. In 1930, Harry Craddock’s “The Savoy Cocktail Book” published a Holland House recipe featuring dry gin, dry vermouth, lemon juice, maraschino and pineapple. The two drinks couldn’t be more different, yet they carried the same name.

The genever-based version has no clear origin point, but it achieved popular acceptance in the early 21st century and never left. It’s the recipe you are likely to get today if you see a Holland House cocktail on a bar menu.

Genever is essentially the Dutch grandfather of gin. It’s made from malted grain and flavored with juniper, creating a sweeter flavor profile than the dry and juniper-dominant London dry gins as well as the citrusy and floral modern gins. Dry vermouth rounds out some of the genever’s edges and puts this drink into Martini territory before things take a left turn with lemon juice and bittersweet maraschino liqueur, a combination reminiscent of the Aviation.

The Holland House may have an obscure provenance, but there’s no denying its appeal. It’s malty, tart and packed with flavor. 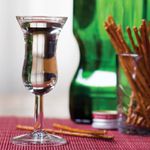