Alongside ubiquitous highballs like the Gin & Tonic and the Vodka Soda, the Ginger Ale Highball is an essential drink for being simple, easy to craft and always pleasing. There’s something about the mix of warming whiskey, spicy-sweet ginger and bubbly soda that, when garnished with a lemon or lime wedge for a bit of added tartness, really hits the spot.

The Stone Cold Larceny comes from bartender Ted Kilgore who, as the founder of Planter’s House, a cocktail bar in St. Louis, Missouri, helped bring national attention to the city’s cocktail scene. In this recipe the Ginger HighBall gets some extra autumnal qualities with the addition of apple juice. Given that the drink is a simple one with three ingredients, each aspect’s quality greatly impacts the final product. Because of this, using a high quality fresh-squeezed apple juice from, say, a local farmer’s market or speciality grocery store is going to produce a superior highball than if using a from-concentrate brand of store-bought apple juice.

Similarly, the choice of whiskey is important to the Stone Cold Larceny, but that is more about personal preference. Kilgore uses Larceny bourbon, which lends the drink its name. The Kentucky straight bourbon is relatively new, being first released in 2012 by Heaven Hill Distillery. Like its fellow whiskey, Old Fitzgerald, Larceny is a wheated bourbon, which gives it sweater notes than a bourbon made with, say, a heavy rye or malt profile. While the Kentucky straight bourbon is the go-to for this drink, there is the option to use one of Larceny’s barrel-proof bourbons. The strength of the whiskey will cut right through the apple and ginger spices, for a bolder, more assertive highball. It will, however, significantly raise its alcohol content as well, so some restraint may be necessary if making more than one.

The final ingredient in this three-ingredient drink is the soda. Kilgore doesn’t specify between ginger beer or ginger ale, but there is a noticeable difference. Unlike ginger ale, ginger beer is naturally fermented, giving it a more robust and fresh flavor, with heavier ginger spices, lighter sweetness and, sometimes, a cloudiness that comes from the ginger and yeast. Ginger ales vary wildly, from more natural flavors to sodas packed with artificial sweeteners and ginger flavors. If opting for ginger ale over ginger beer, it’s important to use one that uses real sugar and ginger for the best possible drink. Or, you can always make your own. 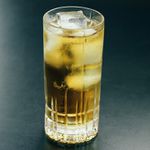 The Uncomplicated Pleasures of Whiskey & Ginger
173 ratings
Rate This Recipe
I don't like this at all. It's not the worst. Sure, this will do. I'm a fan—would recommend. Amazing! I love it! Thanks for your rating!