Merging watermelon with liquor is nothing new, and some go so far as to inject the fruit with a hefty portion of vodka or rum. In this case, you’re starting with a mini watermelon and carving out a portion of its insides. But rather than tossing those pieces, the scooped out fruit goes into a blender with mint leaves, where it’s pureed until smooth. That mixture is then combined with vodka, fresh lime juice and simple syrup and served in the very same watermelon from where it was sourced.

Top the concoction with sparkling wine for a bit of effervescence with each sip, and you get a bubbly cocktail that looks as good as it tastes. Let this recipe be your new party trick.

Click Play to See This Sparkling Watermelon Punch Come Together 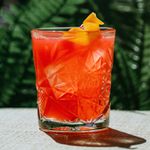 Watermelon Mojito
57 ratings
Rate This Recipe
I don't like this at all. It's not the worst. Sure, this will do. I'm a fan—would recommend. Amazing! I love it! Thanks for your rating!