Among the pantheon of fruity rum concoctions, the Rum Swizzle is an icon. The national drink of Bermuda, it’s is a straightforward and adaptable mix of rums, fruit juices and usually a sweetener that’s not simple syrup—grenadine and falernum are two popular choices. The category gets its name from the way the drinks are stirred (or more accurately, swizzled) with a forked stick over crushed or pebble ice. But like many drinks that normally rely on a specific base spirit (in this case, rum), the swizzle is an opportunity to try other liquors. The Serpent-less Swizzle gives the template an Irish makeover, swapping the rum for Irish whiskey and adding in a few choice ingredients.

The Serpent-less Swizzle comes from New Orleans bartender Nick Dietrich, and it starts with the 12 Year Old Special Reserve whiskey from Powers. It’s a fairly pricey whiskey to be mixing with lemon juice and grenadine, but it’s also exceptionally enjoyable. If need be, a more affordable Irish whiskey can be substituted, and an expression like the standard “gold label” Powers would work well.

Another unique aspect of the Serpent-less Swizzle that differentiates it from others in the category is the use of vermouth. Dietrich uses Dolin blanc vermouth, which is sweeter and more citrus-forward than the dry. It adds a unique botanical element to the overall drink. Lemon juice adds the necessary acidity and brightness, while grenadine gives the drink additional sweetness. When shopping, skip the artificial grenadine that dominated the market for most of the later 20th Century, and pick up a version made with actual pomegranate. Or, if you have the time an inclination, try making your own—it’s extra work, but the results speak for themselves.

These 8 Recipes Will Put Your Swizzle Stick to Good Use 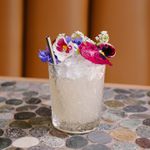