St. Patrick’s Day is always a good excuse to have a drink, and there are a number of themed cocktails for the holiday beyond cheap beers dyed green—the Irish Shot and the Irish Coffee, along with its many variations, are two of the best known. But those who want something a little sweet, a bit tart and a touch smokey should consider the Pot of Gold, a foamy egg white sour garnished with treasure from the end of the rainbow.

As the Pot of Gold celebrates Ireland’s most famed drinking holiday, the drink starts with Irish whiskey—you can use something reliable like Jameson, Powers or Bushmills, or splurge a little and pick something like Knappogue Castle 12 Year or one of the expressions from Teeling. However, it’s wise not to go too big, as the whiskey will be mixed with lemon juice and a ginger honey syrup. Reserve the top shelf bottles for drinking on their own.

Even though this is an Irish drink for an Irish holiday, the whiskey base is bolstered with a quarter ounce of smoky scotch from Islay, one of Scotland’s most peat-heavy whisky regions. The relatively small amount means it won’t overwhelm the drink, but it will lend a deep, smokey and complex nuance, and you can use whatever Islay whisky you have on hand.

Rather than the traditional simple syrup used in most Whiskey Sours, this drink takes a honey ginger syrup, which gives it a subtle kick of gingery spice and a smooth mouthfeel. That silkiness is amplified by egg white, though those who avoid egg can substitute an ounce of aquafaba, the liquid from canned chickpeas. It’s important to include a foaming element like one of those two, as it provides a pillowy cushion on which to rest the drink’s most stunning feature, a few flakes of edible gold. Luckily, you won’t need to hunt down a leprechaun for this, as you can find edible gold flakes at baking stores or buy them online.

Click Play to See This Pot of Gold Cocktail Come Together

*Ginger honey syrup: Combine 1/4 cup chopped ginger, 1 cup honey and 1/2 cup water in a saucepan and bring to a boil over medium-high heat. Reduce heat and simmer for 2 minutes, then let stand until room temperature. Strain into a container and refrigerate for up to 2 weeks.

Think Beyond Green Beer With These St. Patrick’s Day Cocktails 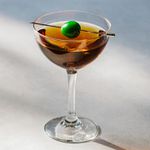