Alex Frane
Alex Frane is a freelance writer who has been writing about food, drinks and local culture since 2013, with a primary focus on spirits, cocktails, and bartending. He has interviewed dozens of bartenders from across the country, and visited some of the country’s top cocktail destinations.
Learn about Liquor.com's Editorial Process
34 ratings
Add a comment

When it comes to the hallmarks of the Golden Age of cocktails, the Pegu Club lacks the notoriety of the other big names like the Sazerac, Mint Julep and Martini. Yet it’s an essential classic, the gin equivalent to sours like the Daiquiri and Margarita, and the drink’s eponymous place of origin even inspired the legendary craft cocktail bar in New York City of the same name.

The Pegu Club’s origins date back to the early 20th Century, and to the club of the same name located just outside of Rangoon in what is now called Myanmar. Like many British social clubs in southeast Asia, the Pegu Club was a product of imperialism, a place for British officials to enjoy some libations in their newly colonized territory. Its signature cocktail borrowed the name, at least when it was published in the famed “Savoy Cocktail Book” by Harry Craddock.

As for the drink itself, it’s essentially a Gin Sour but without the egg whites and with the addition of bitters. Rather than simple syrup, the Pegu Club takes the Sidecar route and uses triple sec for sweetness and additional citrus notes. Modern recipes sometimes use Cointreau, which certainly works, but others call for orange curaçao. In short, whoever is making the drink should decide for themself with favored orange liqueur to use. 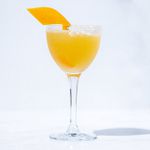 Adding bitters to a sour isn’t unheard of, but it is a bit unusual. Most of the other big name sours skip them. But the Pegu Club uses a single dash each of Angostura and orange bitters, enough to give the drink complexity without overwhelming the botanicals in the gin or the brightness of the lime juice and orange liqueur. The bitters pair also give the sour a subtle but noticeable flush of color, enhancing the lime juice enough so the drink has a lovely golden hue.

Though the Pegu Club shrunk in popularity after Prohibition, it has made a resurgence during the last decade, no doubt partially due to the popularity of the (now-shuttered) New York bar. It’s a worthy inclusion to any list of essential classic drinks, and one that every cocktail fan should try at least once.