While the Gin & Tonic is one of the most ubiquitous highball drinks, tonic doesn’t tend to be paired with many other spirits, save vodka. Espresso & Tonic, though, is a time-honored mix, and the bittersweet soda blends lovingly with spirits other than gin or vodka, including rum. “A Rum & Tonic is like the two friends you have and you can’t figure out why they’re so close until you really spend time with them,” says Daniel Moik, a bartender and rum expert in Hamilton, Bermuda.

As a self-professed coffee geek, Moik has had his fair share of Espresso & Tonics. The refreshing, caffeinated beverage acted as the starting point for the Nightcap, which sees the addition of rum and syrup to add some kick and sweetness. The rum, a gold rum from Goslings, has notes of butterscotch and vanilla but finishes dry. Maple syrup adds sweetness, Angostura bitters lend complexity, and orange zest matches the tonic’s citrus notes.

While Goslings is primarily known for its black strap rum that is the base for a proper Dark ’n Stormy, the Nightcap calls for the Gold Seal, a newer expression. Brighter and softer than the Black Strap, the Bermudian rum pairs with the gentle bittersweetness of the cold-brew coffee.

Grade A maple syrup is another necessary ingredient in the drink. Harvested earlier in the season, grade A indicates a lighter amber color. Grade B refers to a darker, more robust syrup, which could potentially overwhelm in the Nightcap. Moik uses San Pellegrino tonic water in his highball, but any high-quality tonic water will serve well in the drink, just be sure to taste for your flavor profile preference.

Despite its name (a nightcap is generally a soothing cocktail, the last drink of the night after a big dinner or in front of a warm fire), this Nightcap is more an energy booster than a soporific. “This drink is a great summertime pick-me-up as the sun is setting and you need that little boost to keep the party going,” Moik says.

*Use your favorite bottled cold-brew coffee or make some yourself by soaking 140 grams ground coffee beans in a coffee filter with 32 ounces water for 12 hours. After steeping, remove the grounds by straining through a coffee filter. 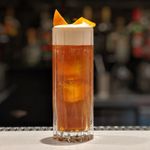