The Manhattan dates back to the late 19th century, and seemingly since its invention, barkeeps and drinkers have been experimenting with the classic formula of whiskey, sweet vermouth and bitters. It’s not because the classic needs tweaking—the Manhattan has proved itself a well-balanced winner, enjoyed by countless people around the world. Instead, it’s because the three-part recipe is ripe for riffing, as spirit swaps and subtle tweaks can create new iterations that are equally worthy.

The Monte Carlo is one of those riffs. Its origin is unknown, but the drink features rye whiskey, Benedictine and aromatic bitters and first appeared in print in 1948 as part of David Embury’s “The Fine Art of Mixing Drinks.” Benedictine, which takes the place of vermouth, is a French liqueur made from a secret blend of 27 herbs and spices, including saffron, cinnamon, fir cones and juniper.

When choosing your rye, Dietsch suggests using something with heft to it, like Rittenhouse, which clocks in at 100 proof. Its higher alcohol content and spicier profile helps to balance the sweet Benedictine. Once you’ve got your bottle in hand, stir together the three ingredients, then serve in a rocks glass over a large ice cube—no garnish necessary.

The Monte Carlo is not a Manhattan, but it will remind of the classic drink while providing a flavor all its own. 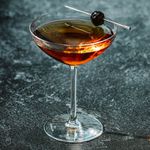 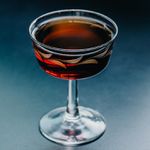 Waldorf
32 ratings
Rate This Recipe
I don't like this at all. It's not the worst. Sure, this will do. I'm a fan—would recommend. Amazing! I love it! Thanks for your rating!