Chocolate milk: for many, it was a simple pleasure growing up, an afternoon treat to be enjoyed on occasion. For others, an indulgence enjoyed regularly into adulthood. But even those who haven’t downed a glass of chocolate milk since childhood can appreciate the drink when it gets some booze thrown in. Enter the Leche Mexicana, or Mexican Milk, from spirit ambassador Armando Zapata, a rich and creamy concoction that’s sure to please even the most “mature” of palates.

Tequila, crème de cacao, and half-and-half may seem an unorthodox combination, but the drink does have precedent. Replace the tequila with some brandy, swap the half-and-half for cream and tweak the proportions, you have yourself an iconic cocktail, the Brandy Alexander, itself an offshoot of the gin-based drink, the Alexander. Besides, the Leche Mexicana stands on its own accords, with blanco tequila making for a brighter, lighter drink, though one still rich and creamy.

While the recipe calls for a blanco tequila, the other ingredients are robust enough to stand up to aged tequilas. Something like a reposado (aged less than a year) or an añejo (aged more than a year but less than three) can bring an extra level of depth and boldness to the drink, and bring it more in line with something like a Brandy Alexander. However, stick to tequila—trading it for something like mezcal will bring an odd smokiness and earth to the drink, potentially muddying it.

A sweet and frothy libation, the Leche Mexicana is most appropriate as an after dinner treat or nightcap. Though the recipe doesn’t call for a garnish, dusting the top with a little freshly ground nutmeg adds a nice touch, and a bit of orange zest amplifies the tequila elements. Similarly, any sort of smaller glassware can be used, but using a coupe or Nick & Nora glass imbues the drink with extra elegance.

Despite any advertisement-fueled adages about milk’s health benefits, the Leche Mexicana should not be considered remotely healthy. The calories alone should limit it to a “once in a great while” indulgence, though that might be hard to do after the first try. 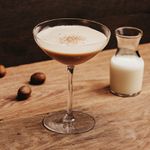 Skip Dessert. Have a Brandy Alexander Instead.
424 ratings
Rate This Recipe
I don't like this at all. It's not the worst. Sure, this will do. I'm a fan—would recommend. Amazing! I love it! Thanks for your rating!