The Blood & Sand is a classic, but it’s an odd one. Its base is scotch whisky, rather than the more commonplace bourbon or rye, and instead of lemon or lime juice it takes orange juice, and it’s sweetened with cherry liqueur rather than a sugar syrup. Le Sang et Sable is a French variation on the classic, and comes from bar legend and father of the Cosmopolitan, Toby Cecchini. It tweaks most of the ingredients, swapping a few of them out for French products to match the French translation of the name, and adding a few others. 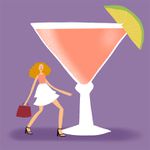 For starters, Le Sang et Sable uses brandy as its base, rather than scotch. As with any good French brandy drink, that means cognac—H by Hine cognac to be precise. You can substitute with another French brandy if need be, though the H by Hine offers a quality product at a very decent price range, especially for cognac.

Rather than the more traditional Italian red vermouth that you would find in a Blood & Sand, Cecchini stick with French, using Dubonnet rouge aperitif. This fortified French wine is similar to vermouth, but also has the bitterness of quinine, along with other herbs and spices. Cherry Heering, the Danish cherry liqueur, sticks around in this Blood & Sand variation. Like always, if you substitute with another cherry liqueur you’ll want to test for sweetness before serving, as Heering tends to be on the sweeter side compared to others.

Finally, rather than the traditional freshly squeezed orange juice, Le Sang et Sable calls for equal parts lemon juice and blood orange juice—the latter adds a beautiful ruby touch to the already crimson drink, but can be hard to find outside of the winter months when it’s in season. 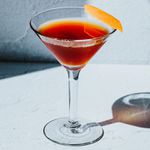 Classics You Should Know: The Blood & Sand
65 ratings
Rate This Recipe
I don't like this at all. It's not the worst. Sure, this will do. I'm a fan—would recommend. Amazing! I love it! Thanks for your rating! 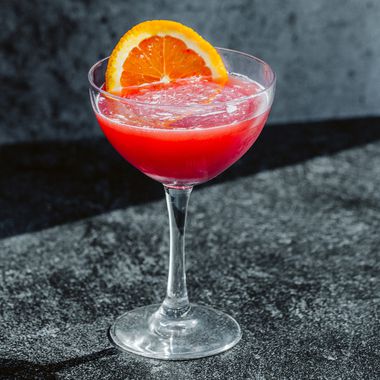