The Old Fashioned: a timeless, time-honored drink that, for some, is the best format for displaying the quality and nuances of a particular spirit. Sugar and bitters both enhance a liquor’s individual characteristics, especially when those ingredients are carefully paired with the base spirit. Ice mellows the heat of the liquor while the slow dilution allows for the subtleties to come through.

Order an Old Fashioned in a bar without specifying your liquor of choice, and chances are you’ll be handed one made with bourbon. Most people’s minds go to whiskey in an Old Fashioned, though there are many exceptions, like the brandy Old Fashioneds served in Wisconsin or the rising trend of the Rum Old Fashioned. And it makes sense: whiskey just fits in the drink.

But for whatever reason, most of the time it’s an American whiskey, like rye or the aforementioned bourbon. But this Old Fashioned from bartender Jack McGarry take a different route, reaching across the sea to the Emerald Isle for that often misunderstood category of spirits: Irish whiskey.

In particular, McGarry uses Jameson Black Barrel Irish Whiskey. Even the most casual drinkers of Irish spirits will recognize the name Jameson, the most popular Irish whiskey on the market. But the Black Barrel isn’t the standard Jameson bottle that lines the shelves of everything from dive bars to cocktail lounges. Instead it’s aged 12 years in ex bourbon and sherry barrels, giving it far more depth and nuance.

Since Irish whiskey already has a bit more sweetness than most bourbons, the drink doesn’t need a lot of sweetener. Rather than the traditional simple syrup used in Old Fashioneds, this recipe calls for Benedictine. This herbal liqueur plays well with the whiskey, adding some sweetness as well as a botanical depth that is further enhanced by both Angostura and orange bitters.

As with any good Old Fashioned, the Irish Old Fashioned is served over large ice cubes or a single large cube and garnished with an orange twist. 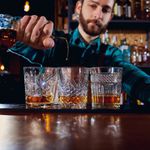