Those who love rich, dark and botanical-heavy drinks will likely appreciate the Holy Smokes, a cocktail by bartender and spirits representative Tony Devencenzi. While at its base it resembles the spirit-forward Manhattan, its ingredients offer a more robust, layered experience overall.

The Holy Smokes is fairly specific about many of its ingredients, but one area where it is not is the base spirit, other than it calls for bourbon. With countless bourbons on the market, from rye heavy ones to wheated, bottled-in-bond to barrel proof, you’ve got plenty of room here to play. Any bottling you prefer to use in a Manhattan or even Old Fashioned will work, especially as the Holy Smokes is accompanied by some pretty bold liqueurs. Think of the bourbon as the backdrop for the drink, so a bourbon that is assertive but not overpowering will be best.

However, unlike a Manhattan which calls for sweet vermouth, the Holy Smokes calls for an equal-parts mix of Cardamaro vino amaro and Benedictine. The first is a wine-based liqueur flavored with numerous botanicals, most notably blessed thistle and cardoon; both of which are related to artichokes, making it a bit like Cynar. The other is an herbal liqueur made by monks, only a few of which know the entire recipe (fans of Chartreuse might recognize that story). Flavored with angelica, hyssop and lemon balm, its most notable use is in a Vieux Carré, but it plays an important role in the Holy Smokes by adding a rich, sweet and botanical profile to the drink.

A few dashes of Bitter Truth chocolate bitters will not make the drink taste overtly chocolatey but will lend increased complexity and a hint of cocoa that complements the other flavors. Finally, it calls for a teaspoon of Ardbeg Uigeadail. An Islay scotch, Uigeadail is named for the loch that the distillery draws its water from (oo-guh-doll is the pronunciation), and it means “dark and mysterious.” Like other Ardbeg whiskies, this one is extremely peaty, which means even a teaspoon of it gives plenty of smoke to the Holy Smokes.

But as the cocktail’s name implies, there’s more than one smoke in the glass. The second comes from flaming a small bit of orange peel over the drink. The process is less challenging than it sounds for first-timers. Simply hold an orange peel zest-side-down over a glass with a few fingers, then gently warm it with a match or lighter. After a few passes with the flame, squeeze the peel to express the oils. If done right, the oils should spark and flame as they pass through the flame, caramelizing as they mist over the drink. 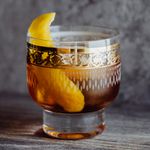 Vieux Carré
144 ratings
Rate This Recipe
I don't like this at all. It's not the worst. Sure, this will do. I'm a fan—would recommend. Amazing! I love it! Thanks for your rating! 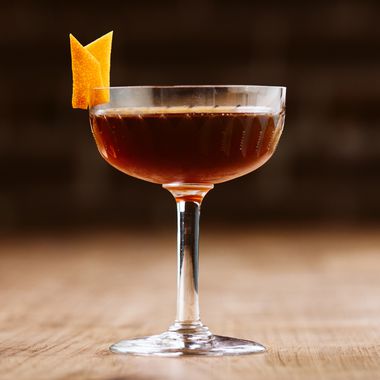