The Gin Fizz is a classic. A simple-but-delicious marriage of a Gin Rickey and a Gin Sour, the drink is a popular beverage for both late-night drinking as well as for brunch. The Ginger Gin Fizz, served at Barcelona’s buzzy gin-focused cocktail bar Xixbar, is ideal for an early-morning pick-me-up, with the bright, bracing and slightly spicy inclusion of ginger to help start the day with a kick.

Essentially, the drink works as a Gin Fizz but with a few minor tweaks. The smallest of these is adding some lime juice to the usual lemon juice. It’s only a quarter ounce, but it pairs nicely with ginger and adds extra tartness. That, in turn, is balanced by egg white, though there’s less here than normally called for in a Gin Fizz.

The big change is the use of a ginger-infused gin. The process for making this is simple, though it takes a while. Merely slice up a quarter-cup of ginger, add it to your favorite gin and let it sit for a few weeks in a cool, dry space. Alternatively, using a sous vide device to rapidly infuse the ginger into the spirit can bring that time frame from a few weeks down to a few hours. But for those who aren’t blessed with a sous vide device at home, it only takes patience.

That’s not all for the ginger, though: The Ginger Gin Fizz also calls for a few drops of ginger bitters. There are a few options on the market these days, including Hella Cocktail Co., Bob’s Bitters and the popular Bittermens Bitters. The drink only calls for a few drops, but you can try them in other drinks to add some kick, like an Old Fashioned, Manhattan or even a Martini in place of orange bitters. For those who really adore the spice, try using the ginger-infused gin and the ginger bitters in your next Martini. 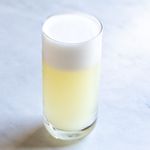 *Ginger-infused gin: Combine 1/4 cup sliced ginger and 3 cups gin in a glass jar with an airtight lid. Allow to sit for 2 weeks in a cool, dry place, then strain into a clean bottle. Store in the refrigerator for up to 2 weeks.