At first glance, the Floradora looks like a twist on a Tom Collins, with ginger beer replacing club soda and raspberry syrup replacing simple syrup. This may be the case, but the exact origins of this classic, pre-Prohibition drink are unclear. What is is clear, however, is that it was named for a popular Broadway musical that premiered in 1899. Florodora (spelled slightly different from its namesake drink) ran for over 550 performances and was famous for its dancing “Florodora girls.”

Bright, pink and bubbly, the Floradora matched the aesthetics of the dancers from which it got its name. The spritzy gin drink balances the bitterness of London dry gin with the tartness of lime, sweetness and fruit of raspberry syrup and spicy-sweet flavors of ginger beer, resulting in a pleasing, refreshing highball.

The drink is forgiving when it comes to its ingredients. Any London dry gin of decent quality will do, something like Beefeater, Tanqueray, Aria or Sipsmith. Ginger beer also offers an opportunity to play with spice and sweetness levels. A wide array of options are available these days, so it’s hard to go wrong. You can even try your hand at making your own. Or you could use ginger ale, if you prefer, but that will lead to a sweeter drink with less ginger spice.

Homemade raspberry syrup is a breeze to make and adds color, sweetness and fruit to the drink. Using frozen berries as called for means you can make it at any time of the year. They syrup‘s most famous application in cocktails is the Clover Club—another late 19th century gin drink—but you could also use it to punch up a Margarita, Daiquiri or any other drink that would taste good with a berry infusion. 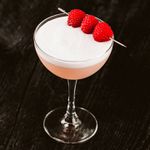 Classics You Should Know: The Clover Club
74 ratings

*Raspberry syrup: In a bowl or other large container, muddle a 12-ounce pack of frozen raspberries and 3 cups simple syrup. Let stand for 12 hours, then strain out and discard solids. The syrup will keep, refrigerated and tightly sealed, for up to one week.