Eggnog is a seasonal treat that warms up December with its rich blend of liquor, eggs and cream. But there’s more than one way to make Eggnog, as evidenced by the many recipes gracing menus and home bars around the globe. Some choose to make their drinks by separating whites from yolks and beating the eggs with sugar to form peaks. Some make their Eggnog in a blender. And others throw all the ingredients into a shaker with ice. Los Angeles bartender Beau de Bois takes the latter path to make the Cousin Eddie, a fun spin on traditional Eggnog that includes three spirits: Armagnac, aged rum and fernet.

For the Armagnac (a type of brandy produced in the Armagnac region in Gascony, France), choose whichever bottle you prefer. But de Bois gets specific with the other boozy ingredients, suggesting Guyanese-made El Dorado five-year-old rum and Czech-made R. Jelinek fernet. The rum has notes of tropical fruits, caramel, butterscotch, coconut and vanilla, while the fernet isn’t as bitter or polarizing as the popular Italian amaro, Fernet-Branca. Instead, it’s minty, herbal and bittersweet, with notes of anise, clove and raisins.

That trio of base spirits provides a complex backbone to the cocktail, which also includes heavy cream, a whole egg, sugar and nutmeg. Shake the ingredients first without ice to emulsify the egg and create a silken texture, then shake again with ice until chilled. Once strained into your glass, you will garnish the drink with black pepper, cinnamon and nutmeg to give each sip a spicy, peppery aroma. This is one cousin you’ll want to host all season long. 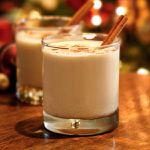 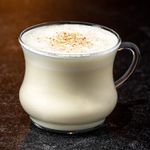 Uncle Angelo’s Eggnog
36 ratings
Rate This Recipe
I don't like this at all. It's not the worst. Sure, this will do. I'm a fan—would recommend. Amazing! I love it! Thanks for your rating!