Classic and modern-classic cocktails rarely need to be tweaked. Often, these drinks stand the test of time for a reason: They’re delicious, well-balanced and memorable. But despite their many merits, bartenders and enthusiasts regularly create their own riffs on popular cocktails, whether it’s swapping the base spirit in a Negroni or using amaro in place of sweet vermouth in a Manhattan. The Cosmopolitan is not immune from this treatment, as witnessed by this Cosmo Rita recipe from bartender Armando Zapata, which swaps the vodka out in favor of tequila.

The classic Cosmo recipe calls for citrus vodka, Cointreau, lime juice and cranberry juice cocktail, which is basically just sweetened cranberry juice. Created in the 1980s, the pink-hued Cosmo was a popular order, but it reached its peak in the late-1990s and early-2000s, coinciding with HBO’s hit show “Sex and the City,” where the cocktail was heavily featured as a favorite of the characters. For a time, it may have been the most popular cocktail in America. Since then, the Cosmo has taken a tumultuous ride, still beloved by many drinkers but reviled by certain bartenders, who tired of making the drink. Regardless, you can’t deny its staying power.

If you want to branch out from the classic recipe, the Cosmo Rita features tequila, triple sec, cranberry juice and fresh lime juice. It’s a recognizable riff, but tequila’s earthy, vegetal profile is much different than vodka’s more neutral flavor, so the spirit stands up taller in the drink. This recipe also changes the classic ratios, decreasing the orange liqueur and lime juice, and doubling the cranberry juice from a half ounce to a full ounce. This tames the alcohol slightly, while giving the drink a more pronounced cranberry flavor. 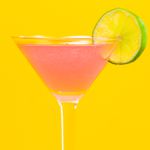 The Classic Cosmopolitan: The drink that started it all. Citrus vodka, Cointreau, lime juice and cranberry juice cocktail, shaken and served in a cocktail glass.