The Corpse Reviver was a family of cocktails traditionally consumed as a hair-of-the-dog, a hangover reliever to refresh and enliven after a night of heavy drinking. However, the category was a loose one, with no real shared characteristics save that they tended to be relatively high-proof and served up, rather than over ice.

The Corpse Reviver No. 1’s first recorded recipe was in “The Savoy Cocktail Book,” originally published in 1930. The recipe book was a collection of the Savoy Hotel London’s most popular drinks. In it, bartender and author Harry Cradock writes of the Corpse Reviver No. 1, “To be taken before 11 a.m., or whenever steam and energy are needed.” Of course, alcohol is not a stimulant like caffeine, and it is generally ill-advised to be drinking before noon, especially in pursuit of “energy.”

Though popular during the late 19th and early 20th century, Corpse Revivers generally faded away after Prohibition. But like other many other pre-Prohibition drinks, they’ve seen a revival in recent years. Walk into a bar today and scan the drink menu, and you’re more likely to find a Corpse Reviver No. 2, or a variation on the No. 2, than any of its fellows. Still, the No. 1 does appear from time to time.

Unlike its more popular sibling — a bright and botanical gin drink misted with absinthe — the Corpse Reviver No. 1 is a rich and vibrant mixture with a brandy base. It is, yes, an odd choice for what is historically served as a morning drink, but it is a lush and lovely evening tipple, leaning towards the Manhattan family with its dark spirits and vermouth.

The richness largely comes from the split-based brandy, as the drink is equal parts cognac and Calvados, an apple brandy from Normandy, France. The richness of the brandies calls for a drier, more botanical-forward sweet vermouth, something like Punt E Mes or Carpano Antica Formula. Sweeter vermouths can potentially turn the drink cloying.

For those who cannot find a bottle of Calvados, or who want to take a detour, it’s acceptable to use another type of apple brandy, though the flavor profile will not be identical. Similarly, a Spanish brandy or other fine brandy can replace the cognac, but again, there will be differences. Try playing around with different kinds of brandies until you find one that is the most revivifying for your Corpse Reviver No. 1. 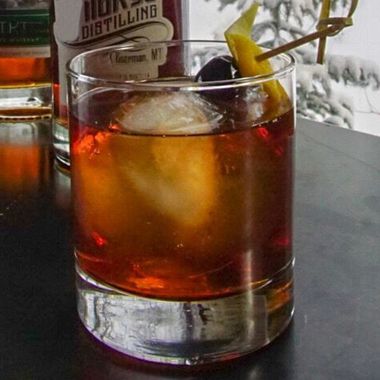