The Clover Club cocktail can be traced back to the late 1800s and Philadelphia’s Bellevue-Stratford hotel. This popular hangout drew crowds of writers, lawyers and titans of industry, who convened to talk about issues of the day. Naturally, their meetings included drinks, and the Clover Club with gin, fresh lemon juice, raspberry syrup and egg white was a favorite among this genteel set.

The pre-Prohibition classic is one of Philadelphia’s greatest contributions to cocktail history, but like many drinks of its day, the Clover Club all but disappeared for most of the 20th century. Eventually, it found its way back into rotation, helped in part by its appearance in modern cocktail books, including Gary Regan’s “Joy of Mixology.” Its resurgence was solidified in 2008, when Julie Reiner opened a cocktail bar in Brooklyn named for the classic drink. Naturally, the bar put a Clover Club on the menu, and the cocktail has remained there since.

Any high-quality gin can make a great Clover Club, but a good London dry gin will complement the cocktail’s tart fruit and silky body. While egg white is optional in some drinks (and it’s technically optional in this one, too) its role is important, adding texture and yielding a luscious, foamy head when shaken and strained.

This recipe calls for raspberry syrup, an easy-to-assemble ingredient that requires only one more step than a traditional simple syrup. However, if you’d like to save a few minutes of stove time, you can take a shortcut by muddling three or four fresh raspberries with a half ounce of simple syrup right in the shaker. This essentially creates a quick syrup, with very similar results, and you still get that fresh raspberry flavor you want in a Clover Club.

Click Play to See This Clover Club Recipe Come Together

*Raspberry syrup: Add 1 cup sugar and 1/2 cup water to a pot. Stir over medium heat until the sugar has dissolved. Reduce heat to low, add 1/2 cup fresh raspberries, and macerate into a pulp. Fine-strain to remove the berry’s tiny seeds. Optionally, add 1/2 oz vodka as a preservative. Refrigerate in a jar until ready for use. 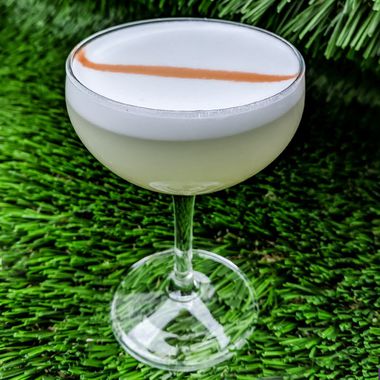