Unless you’re living somewhere tropical, it can’t always be sunshine, warm weather and beach trips. That’s what the Chi-Chi Organico is for, though. This tropical concoction comes from bartender and brand ambassador H. Joseph Ehrmann, who owns Elixir in San Francisco (reportedly the second-oldest continually operating saloon in the Bay Area), and it’s sure to transport you to some sun-drenched beach no matter what the weather is actually like where you are.

Essentially the Chi-Chi is a vodka take on a Piña Colada, with pineapple-infused vodka, pineapple puree, coconut and heavy cream blended with ice. For the vodka, Ehrmann uses Square One Organic, which gets infused with dried pineapple. Another middle-to-high shelf vodka brand can fill in, but if it’s not an organic one, then the cocktail name doesn’t really work.

Ehrmann infuses his organic vodka with a single slice of dried pineapple. The richness of dried pineapple means it quickly and deeply infuses the spirit, and lends it a darker, sweeter flavor than if using fresh pineapple. For the fresh pineapple aspect, the recipe calls for pineapple puree, rather than the more commonly used pineapple juice. Simply cube up some pineapple and throw it into a blender or food processor and pulse until the puree is smooth. Despite the fact that it will end up in a blender with the rest of the drink, it’s still best to puree it ahead of time so it is more evenly incorporated in the final product.

As a blended drink, the smaller the ice cubes are, the easier it is to process and the smoother it will be. Larger ice cubes will take longer to break down and will be more uneven and lumpy in the end. Finally, while the drink is traditionally served in a Hurricane or highball glass, serving it in a hollowed-out pineapple and garnishing with some umbrellas and twisty-straws will complete the tropical vibes.

*Pineapple-infused Square One organic vodka: Add 1 slice of organic dried pineapple (with no added sugar) to a 750-milliliter bottle of Square One Organic vodka and let stand for 1 to 2 days. Taste daily until the flavor reaches the intensity you prefer. Strain the liquid into a clean bottle. 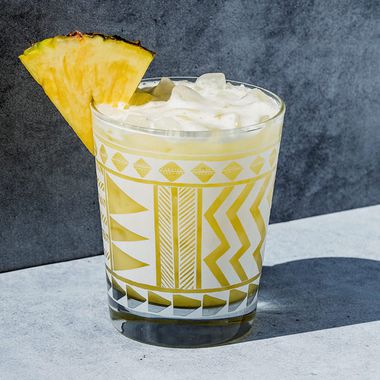 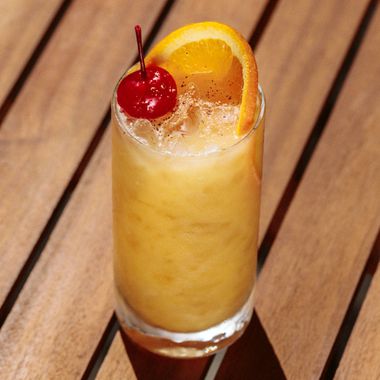 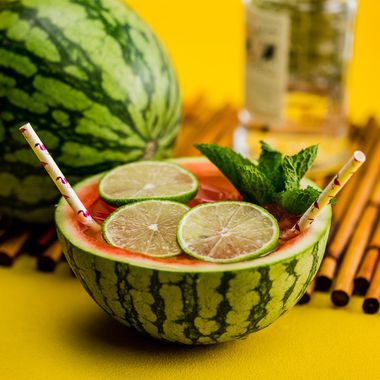