Bartending icon Tony Abou-Ganim—also known as The Modern Mixologist—created the Cable Car cocktail as an homage to San Francisco’s iconic, vintage transportation that passes by the Starlight Room, which he co-founded. An icon of a bygone era, the city’s cable cars are the last remaining manually operated cable car systems in the country and still climb the hills of San Francisco, carrying tourists and commuters (though mostly tourists) up and down the busy streets.

Whether or not one is familiar with the drink’s namesake, you’ll likely appreciate this rum sour for its sweet, tart and lightly spiced flavors. Essentially an adaptation of the Sidecar, the Cable Car swaps the brandy for spiced rum, an uncommon ingredient in cocktails but a welcome change during the late 1990s. In an era defined by the Appletini and Cosmopolitan, Abou-Ganim’s innovative drinks helped define San Francisco as a worthy cocktail destination and as a trendsetting locale.

At the time of the Cable Car’s creation, Captain Morgan was likely the most available label for spiced rum. While today it’s still the most famous of the category—besides maybe Kraken—the Captain has plenty of competition. Both Cruzan and Bacardi make inexpensive and serviceable spiced rums—neither of them break $15 in most markets but they both work well in cocktails. For a more indulgent approach, Chairman’s Reserve from Saint Lucia, Boukman Botanical Rhum from Haiti and Don Q Oak Barrel Spiced Rum from Puerto Rico are all stellar spiced rums and range from $30 to $50 a bottle.

Similar to a Sidecar or Brandy Crusta, the Cable Car includes an orange liqueur in addition to simple syrup for sweetness—specifically, orange curaçao. However, using something like Bol’s will lead to a more cloying drink, and it’s best to instead use a dry curaçao; Abou-Ganim uses Marie Brizard orange curaçao, an elegant blend of bitter oranges from Haiti and sweet-orange zest from Spain. A strong alternative is Pierre Ferrand Dry Curaçao—crafted in collaboration with cocktail historian David Wondrich, it’s a complex and botanical citrus liqueur macerated with brandy. Other orange liqueurs like Cointreau or Grand Marnier will also make a stunning drink.

The presentation of the drink is another aspect that helped cement the Cable Car’s status as a classic. Rather than a more traditional sugared rim, Abou-Ganim uses a mix of sugar and cinnamon, which lends warmth and gentle spice. One alternative is to line half the rim with the mix, so the drinker can select with each sip whether they want the extra sugar or not. 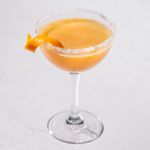 Craving a Classic? Go For a Sidecar.
347 ratings
Rate This Recipe
I don't like this at all. It's not the worst. Sure, this will do. I'm a fan—would recommend. Amazing! I love it! Thanks for your rating!