Inspired by the ingredients traded along the old spice routes in India and Sri Lanka, the best-selling cocktail at San Jose and San Mateo, Calif.’s Mortar & Pestle Bar, by beverage director Lucas England, balances the spicy and the lightly sweet. “Swapping in rum for whiskey in an Old Fashioned is a great way to surprise guests with warm, spiced flavors,” says England. “If the rum is overproof, it can be softened with sugar syrups or bitters.”

This recipe originally appeared as part of “So You Love a Whiskey Old Fashioned. How About the Rise of the Rum Old Fashioned?”

*Garam masala syrup: Bring 1 cup water to a simmer, remove it from the heat, and add 1 cup sugar and 2 tbsp plus 2 tsp garam masala powder. Stir until the sugar dissolves, then let the spices steep for 10 minutes. Fine-strain out solids through a cheesecloth, and store in the refrigerator for up to 2 weeks. 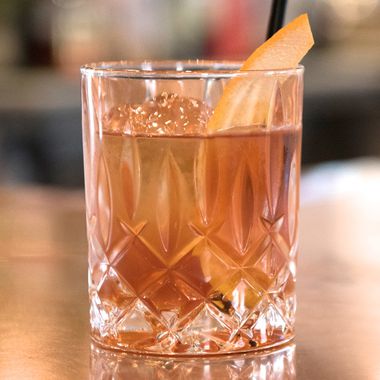