Cocktail & Other Recipes Preparation Style Up

The New York Sour is an interesting concept—merely by adding a layer of red wine to a classic Whiskey Sour, it has crafted a new family of drinks. The 1870 Sour is one such variation, a Tennessee whiskey sour that replaces the familiar simple syrup with a mix of maple syrup and blueberry jam.

The 1870 Sour comes from bartending veteran Dominic Venegas. The drink begins with Tennessee whiskey, a kind of bourbon that is charcoal-filtered for extra smoothness and a mellowing of its heat. Jack Daniels is the most famous producer of Tennessee whiskey, but Venegas uses George Dickel Old No. 8 instead, a lauded brand in the category.

Also unlike a traditional New York Sour, Venegas uses Meyer lemon juice—this winter citrus is sweeter than your usual grocery store lemons, so the drink is less puckering. This is aided by the maple syrup and a small amount of blueberry jam, which adds depth in addition to sugar.

One of the main draws of a New York Sour is its visuals, with the egg white adding a thick white foam layer and the red wine adding a crimson band atop the drink. But another unique aspect of the 1870 Sour—and one that gives it a rustic, old-world feel—is the choice of vessel. Rather than a cocktail coupe or rocks glass with a large cube, Venegas opts for an 8-ounce Mason jar or a Bourdeaux wine glass. Either container will show off the drink’s beautiful stratifications.

When it comes time to top the drink with the red wine, Venegas uses Ravenswood Sonoma County old vine zinfandel. A nice California wine with a reasonable price tag and large-scale distribution, it’s a solid choice, but feel free to use whatever kind of bold, fruit-forward red wine you have around, especially if you plan on opening it for dinner after a round (or two) of the 1870 Sour. 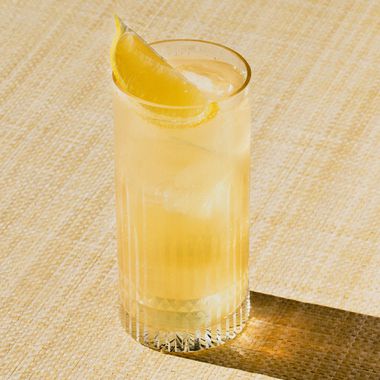