It offers intricately crafted cocktails in a spectacular setting high in the sky.

The most luxurious new bar in New York City is on the 64th floor of 70 Pine, topping the building that also houses the Michelin-starred restaurant Crown Shy. Simply arriving is a production: The elevator only takes you as far as the 63rd floor, home to the new tasting-menu restaurant Saga from the Crown Shy team; a host escorts you up a flight of stairs, where you emerge into a tiny jewel box of a room with doors to the terrace that encircles it, providing views that can be rivalled only from a helicopter.

This is Overstory. Harrison Ginsberg, the bar director of all three venues, has assembled an opening menu of 10 cocktails and three non-alcoholic options; if you’ve had a cocktail in the ground-floor restaurant, you’ll notice a common thread between the two drinks menus, a shared DNA seen in concepts and ingredients such as certain fruits and herbs, such as hoja santa, seen uncommonly in cocktails. For Overstory, the team’s aim was to retain that bloodline but amp up the ingredients, increasing the complexity of prep or using special ones that can be found only for a specific amount of time or be sourced from a very specific place.

Ginsberg admits to being inspired by the space. Even during the bar’s soft opening, he says, “I was just sitting there and was like, this space needs a Martini. And it needs a Martini that’s really close to a classic but that fits in the room. And that’s how the Gyokuro Martini (see below) came to be.

“We have this beautiful space, and it almost feels non-New York,” says Ginsberg. “It feels like a bar that could be in Europe. Then you go out onto the terrace and you can see all the water and the lights, and you definitely know you’re in New York City, but it could almost be Hong Kong. For us it’s taking the idea of a worldly bar and giving it that New York City swagger.” That terrace might be home to the bar’s most coveted seats; the interior is quietly grand, with its plush seating and sensual curves, but those seemingly infinite views are a draw little can rival.

Drinking at Overstory is a luxury experience, with its sumptuous decor, next-level ingredients, stunning glassware, and oh, those views—but it’s also seen in the drink prices (all cocktails were $24 on the opening menu). “We’ve curated something really special, so we feel it’s justified,” says Ginsberg of those prices, along the lines, he points out, of what you’d pay for a Vodka Soda in a plastic cup at many nightclubs or rooftop bars in the city. Overstory’s glassware is certainly many levels up from a plastic cup. Most of it is from Kimura. “We probably looked at more than 100 coupe glasses for the space,” he says. Some might call it obsessive; he calls it being detail-oriented.

“The goal for us was to open the best bar we possibly could in this little jewel box that sits over Manhattan,” he says.

These are the three cocktails Ginsberg feels best represent Overstory.

“The name says it all: It’s an Old Fashioned-style cocktail that is represented through terroir,” says Ginsberg. “Every single ingredient in the drink comes from a very specific place.”

Its base is reposado tequila infused with high-grade palo santo. Tequila, of course, comes from Jalisco in Mexico, and palo santo is specific to parts of the Yucatan Peninsula down to parts of South America. “Palo santo has this really interesting toasted-coconut, chocolatey note that I compare to a Mounds bar,” says Ginsberg.

The drink’s sweetener is a caramelized agave nectar, cooked in a large saucepan to reduce and darken it and then let out with water to thin it to approximately the same sweetness level as a rich simple syrup. The result is a “deep, caramelized flavor and intensified agave characteristics,” he says.

The drink also gets some vin jaune, an oxidative wine from the Jura region of France made from late-harvest savagnin grapes. It’s aged under a cap of yeast, under which, Ginsberg says, it develops particular aroma and flavor compounds that add tropical-fruit and nutty notes, specifically fenugreek. “This cocktail, with nutty vin jaune and caramelized agave and a little bit of a herbaceous note, is almost like an Almond Joy but in Old Fashioned form,” he says. The final touch is a pinch of sea salt harvested by a member of the team in Fort Tilden, near Coney Island, which can be seen from the building’s terraces.

The cocktail gets a honeycomb garnish created by the restaurant’s pastry kitchen. “The honeycomb has the nooks and crannies and webbing that the agave piña has, and also that honey-caramel note to it,” says Ginsberg.

This cocktail was inspired by the space, says Ginsberg, and was created just before the bar’s official opening. “I felt like, how could we not have a Martini in this beautiful space?”

The drink starts with a dash of orange bitters. Its vermouth blend incorporates a few different fortified and aromatized wines. It gets some classic dry vermouth, and a little bit of verjus, some Cocchi Americano, and a Brooklyn Kura sake, made in Brooklyn using traditional methods and heirloom rice grains. “We wanted to use it because it’s from New York and we wanted to use something with a sense of place but built on tradition, just like the cocktail,” says Ginsberg.

The vodka is infused with Gyokuro tea, a highly prized variety of Japanese green tea, from Brooklyn tea company Kettl. “It’s hand-harvested, and this specific one that we’re using is from one single farmer,” says Ginsberg. It’s grown under shade, he explains, which forces the plant to work harder, and it provides the leaves with far more nutrients and nitrates than you’d usually find in green tea, which intensifies its savory quality. “On its own, Gyokuro tea is very savory, almost like a dashi,” he says. “But when you cold-steep it, it has a stewed or overripe tropical-fruit note that we found to be very intriguing.” That’s the reason, he says, for using vodka rather than gin: “We really wanted to showcase this delicate flavor of the tea.”

Ginsberg describes this vodka highball as “floral and light, but super-layered and nuanced.”

It starts with a dash of makrut lime-leaf tincture, “very floral and green,” according to Ginsberg. It gets a bit of lychee liqueur and a touch of yuzu kosho syrup. “On its own, yuzu kosho is pretty spicy and salty, but in the amount we’re using in the cocktail, it just gives a layer of intriguing warming spice to the drink,” he says. Cinnamon syrup intensifies that warming quality, and an acid solution adds brightness.

The drink then gets a bit of Empirical Spirits’ Helena, which Ginsberg describes as “really floral,” and Lillet blanc, with its “beautiful tropical note with hints of yuzu and guava and even some coconut,” he says. “And that’s what led us to using coconut-infused vodka.” For this cocktail, vodka gets fat-washed with coconut oil, giving a coconut note that Ginsberg describes as “clean and refreshing.” Contrary to many drinks flavored with coconut, this one doesn’t put its drinker in mind of beaches and sunscreen. “We don’t find this cocktail to be tropical,” he says. “We just find it to be really pleasant and light and crisp.” It’s all topped with yuzu soda and garnished with a kinome leaf, the leaf from the tree that buds Szechuan peppercorns. “You can see there’s quite a few ingredients in there, but they all work in synergy,” Ginsberg says of the cocktail. 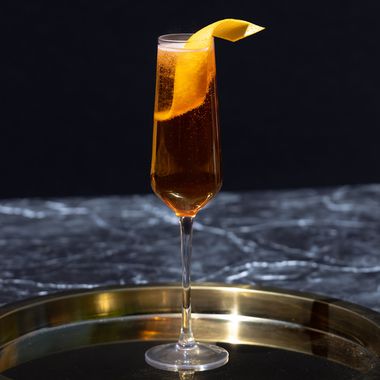