Pick a bottle and get to mixing.

Whiskey and tequila seem to grab the spotlight constantly these days, but despite its lack of splashy headlines, vodka remains the top-selling spirit in the United States, measured by both sales value and actual number of bottles sold. According to the Distilled Spirits Council, Americans bought over 78 million cases of vodka in 2021, totaling $7.3 billion. Maybe no one wants to admit it, but vodka is our favorite drink.

Unlike whiskey and tequila, however, vodka is not consumed neat very often, and that’s reflected in the new bottles that have recently debuted. Both unflavored and flavored variants tout their mixability—one of the reasons vodka is so popular to begin with, and especially salient now given the popularity of ready-to-drink cocktails that are no more than neutral alcohol plus a flavoring and carbonation. What could be easier than combining a shot of vodka with your favorite soda or seltzer?

Beer companies like Natural Light are playing to both sides of the aisle in this arena, offering flavored malt beverages and new, true vodkas with similar branding. Anheuser-Busch heir Steven Busch is also getting into spirits with his Hope Town vodka brand, part of the King Spirits umbrella.

Other unflavored vodkas are similarly showcasing the flavor contribution of their ingredients, a trend that will likely continue since the Alcohol and Tobacco Tax and Trade Bureau lifted the requirement for the spirit to be totally neutral in 2020. Among those playing up their bases are Kástra Elión, made from Greek olives and grain; Altar Spirits’ Ritual Vodka, which uses 100% malted barley; and Hangar 1 Smoke Point, distilled from smoke-tainted wine.

Flavored vodkas remain popular, especially those made with real ingredients. Cherry has emerged as a current favorite, with both Black Infusions and Grand Teton offering variants that derive their flavors from whole fruit. Across the board, messaging about natural ingredients and authenticity—the watchwords many spirits have adopted of late—pervades the vodka universe.

See for yourself with one of these seven new bottles.

Just before the pandemic, Caley Shoemaker left Hangar 1 Vodka—where she had helped build up the brand for several years as head distiller—and set out to open her own distillery in Santa Fe. Altar Spirits opened in late 2021 with Sigil Gin and Ritual Vodka, which is distilled from malted barley. The choice nods to Shoemaker’s roots making whiskey at Stranahan’s, and imparts grassy flavors and a soft texture to the spirit—unusual, and welcome, characteristics for vodka.

Made at Bend, Oregon’s Crater Lake Spirits, this independent brand focuses on creating flavors using only dried fruit—nothing added, including sugar. The new Dark Cherry vodka is made with dried Rainier and Bing cherries from California—a full pound per bottle—and joins Black Fig and Gold Apricot variants in the lineup. Black Infusions’ line clocks in at 30% ABV, making it a natural fit in the current lower-alcohol trend.

Idaho is potato country, and thus this Teton Valley distillery uses spuds as the base for its vodka. While there are existing unflavored and huckleberry-flavored variants, the cherry vodka is new, inspired by founder Lea Beckett’s enjoyment of cherry liqueur while traveling in Europe. The 30% ABV vodka is infused with Oregon cherries and slightly sweetened, and the fruits themselves—still full of flavor—get a second life as Grand Teton Drunk Cherries, perfect for garnishing a cocktail.

Wildfires in California have destroyed homes and livelihoods over the last several years, in addition to having devastated the state’s famed wine industry. Grapes that have been exposed to smoke don’t make good wine—but they can make good vodka, as Smoke Point demonstrates. Distilled at Hangar 1’s Bay Area facility from smoke-tainted merlot and malbec, the vodka offers no hint of smoke, instead presenting a clean, slightly sweet palate—and redeeming, at least a little, an ill-fated harvest.

Steven Busch—yes, of that Busch family, scions of Budweiser—stepped away from beer and into spirits in 2021, launching the King Spirits label with Walker’s Cay Bourbon and Hope Town Vodka. Distilled in South Carolina, the clear spirit was inspired by a village in Elbow Cay, Bahamas, and its bottle features an original design by marine artist Carey Chen. Hope Town comes in unflavored and lime variants, bottled at 40% ABV.

The ideal association between vodka and olives is usually found in a certain classic cocktail. But Kástra Elión, made in Greece, includes the oily fruits as one of its base ingredients. Picked from groves located in the country’s Nafpaktos region, the olives are mixed with grains for fermentation; after distilling, the spirit is brought to proof with spring water from the Crystalline Rock in Mount Taygetus. While the finished vodka offers just a hint of olive flavor, it’s surely ideal for a Dirty Martini.

A brand better known for its frat-party antics than serious drinking, Natural—or Natty—Light branched out from beer into vodka in the fall of 2021. But a step up in ABV doesn’t mean an upgrade to craft cocktails: These vodkas, all at 30% ABV, are designed for easy mixing and easier drinking. The flavors echo those of the brand’s Naturdays line and include Lemonade, Strawberry Lemonade, and Black Cherry Lemonade. 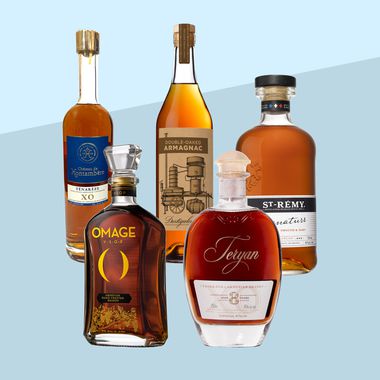