Tyler Zielinski
Tyler Zielinski is a freelance writer specializing in cocktails and spirits and a bartender at Lawrence Park in Hudson, NY.
Learn about Liquor.com's Editorial Process
13 ratings
Add a comment

Cheese in cocktails? If you’re skeptical, you wouldn’t be alone. But it’s an ingredient being used more and more by innovative bartenders. When done well, it can impart texture and depth to a drink, as well as a range of flavors from milky to savory, depending on the type of cheese used and the technique employed to draw out its characteristics.

At Two Schmucks in Barcelona, bar manager Juliette Larrouy has worked with a variety of cheeses in drinks across a few menus. Her Melon, Cheese & Pepper cocktail is inspired by her upbringing in the southeast of France, where melon, balls of mozzarella cheese, and black pepper were often served as a pre-meal hors d’oeuvre.

The cocktail, which is split into a cantaloupe-flavored base comprising gin, dry vermouth, and cantaloupe cordial, and a top layer of mozzarella foam—a form that captures the essence of the cheese and its distinct milky texture—strikes a unique balance: exciting and approachable for casual bar-goers, yet “nerdy” enough for cocktail sophisticates.

The cocktail is made without any citrus juices; the acidity, which lifts the fresh cantaloupe flavor, comes from the vermouth as well as the citric acid powder that’s mixed into the cantaloupe cordial.

“We chose a milky soft cheese made from mozzarella—stracciatella, the inside of the burrata—for the Melon, Cheese & Pepper cocktail because it’s playful and not overly intense in a cocktail,” says Larrouy, emphasizing the importance of not making the cheesy component of drinks too intense, aware that it could be off-putting to guests. “The cheese foam adds a nice contrast in texture from the melon cocktail base, much like the dish from my childhood.” The team tried many techniques for integrating the mozzarella component, and ended up going with a foam “because it was the best method for showcasing the delicate ingredient,” she says. 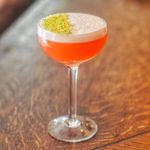 **Mozzarella cheese foam: Combine 200 grams stracciatella di bufala, 200 mL milk, 7.5 mL saline solution, 5 mL white balsamic vinegar, and 5 mL simple syrup in a container and stir to combine. Funnel the liquid into an iSi whipper, then tightly cap to seal. Charge the mixture with two N2O gas cartridges, shaking after each charge to integrate and waiting 5 minutes in between the first and second charge. Once the mixture has been charged with the gas, allow the ingredients to chill by resting in the fridge for at least an hour. Once ready to use, first expel any gas not in solution by lightly pressing the trigger and dispensing into a sink before using to top a cocktail. 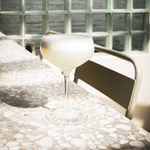 Burrata Breakfast Martini
9 ratings
Rate This Recipe
I don't like this at all. It's not the worst. Sure, this will do. I'm a fan—would recommend. Amazing! I love it! Thanks for your rating!