These are Mariena Mercer Boarini’s winning strategies at the massive Wynn Las Vegas.

Mariena Mercer Boarini’s first official job title in Las Vegas’ hospitality industry was “tequila goddess.” The irreverently named role afforded the Vegas native the chance to visit tequila distilleries and observe the science of spirits up close. This sparked an opportunity to indulge her inner chemistry enthusiast and dig deep into a cocktail’s scientific and sensory elements, a journey that inspired her to build a science-lab-like molecular kitchen in her home and experiment with molecular mixology in 2007. “I’m not a scientist by any means,” she says. “To quote Albert Einstein, ‘I’m only passionately curious.’”

Mercer Boarini parlayed her curiosity into a sparkling career in the Vegas drinking scene built from equal parts craft, entertainment, and sheer volume. In February 2021, she took over as the resort mixologist for Wynn Las Vegas, where she’s responsible for overseeing the drinks programs at all of the hotel’s many venues, after spending a decade running the beverage program at The Cosmopolitan. She’s wasted little time leaving an impression, creating drinks menus for three new venues that launched between July and September 2021: The elegant cocktail bar Overlook Lounge; the Vegas outpost of the high-end L.A. supper club Delilah, and the coastal Mexican eatery Casa Playa.

Several of the cocktails created for these spots highlight Mercer Boarini’s interest in creating holistic sensory experiences. The Overlook Lounge features a list of spritzes finished with aperitif parfums she created to replicate the essence of a specific global setting, such as a Moroccan spice market or Milan Fashion Week. At Delilah, an atomizer of edible parfum accompanies Mercer Boarini’s French 75 riff that she calls The Stepford Wife, which is served in a pink glass flecked with gold flakes. “I’m having a lot of fun these days playing around with aromas and how it sets up flavor and connects to memory,” she says. “I guess I’m in my aromatic period, like Picasso went through his blue period.”

The trio of new spots brings the total of restaurants and bars whose drinks programs Mercer Boarini oversees to 31. It’s a diverse collection, ranging from casual poolside bars to dressy steakhouses. The key to executing it all lies deep within the labyrinth of the Wynn’s backstage area, in the property’s beverage development kitchen. This 1,238-square-foot industrial space exists at the intersection of R&D kitchen and science lab, anchored by a massive stainless-steel table at its center and surrounded by advanced equipment such as liquid nitrogen machines, deep sinks, and bakery racks packed floor-to-ceiling with bottles. The sheer volume of liquor and other ingredients on these racks is essential to the operation; Mercer Boarini estimates some 60,000 gallons of liquid product comes out of the space every year.

The massive kitchen gives Mercer Boarini ample space to whip up a hefty number of cocktails; she projects the creation of roughly 200 new drinks within her first year at the Wynn. The space also gives her a centralized location to deploy the high level of quality control needed to run multiple programs. “We use the kitchen for staff training, collaborative meetings with chefs, drink production, and getting whatever inventory is needed out to the 31 properties,” she says.

While the space binds the Wynn’s 31 programs together, the separate and often intricate attention each venue’s menu commands could potentially cause a case of mental whiplash when switching between them. Mercer Boarini credits Wynn’s total trust in her for mitigating some of the stress, as it allows her to strictly control each program’s details such as glassware, ice, garnishes, and spirit choice without fear of corporate pushback. She also notes her staff’s collective passion for crafting proper drinks helps diffuse any concerns about the programs’ quality going awry. When the time comes to build or adjust multiple programs from her control center, she leans heavily into compartmentalization. “I treat each program like open tabs on a computer,” she says. “I’ll fully immerse myself in whatever project I’m working on and hyper-focus on what’s needed. When I’m done, I’ll ‘close’ that tab and move on to the next project.”

The multisensory beverages Mercer Boarini designs in her creative space pack plenty of senses-dazzling whimsy. The elaborate process of conceptualizing these beverages often equals the complexity of the finished product. She begins the process by studying the drink’s destined venue, scrutinizing its architecture, room décor, and theme for motifs that she can incorporate into her beverages. If the venue is a restaurant, she’ll talk to the chef about how his or her menu connects to a specific cuisine or a certain mood created by the restaurant’s aesthetic. She’ll often work backwards once she obtains this information, coming up with a drink’s name first and riffing on ways to connect the name to the venue’s vibe through spirits and ingredients. She’ll also occasionally sneak in references to history and art if doing so fits within these parameters. “Each place in the Wynn tells some kind of story,” she says. “I love being able to help share that story through my cocktails. Creating them feels a bit like method acting, in the sense that they build their own character and personality based on the inspiration from their surroundings.”

One of the more recent characters she’s brought to life is the Cleo, a dragon-fruit-enhanced spin on a Tommy’s Margarita she designed as a “destination cocktail” for Overlook Lounge. The drink’s pink color and the blue sprinkles on its accompanying dragon fruit garnish play off the room’s similarly hued jewel tones. Yet it’s a Margarita at its core, so it remains approachable despite its unexpected ingredients and festive colors. The Cleo also nods to Mercer Boarini’s own legacy: The smattering of blue atop the garnish is Electricdust, an ingredient she created (and sells on the side) that mimics the tongue-tingling sensation created by the flower known as Szechuan or “buzz” buttons. She used the flowers in her legendary Verbena during her days at The Cosmopolitan; replicating their sensation through a new drink at a new property inherently prompts reflection. “I came up with the Verbena 13 years ago,” she says. “Creating the Cleo helped me stop and think about how far I’ve grown as a mixologist since then.” 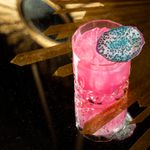 A few self-imposed rules strictly govern the drinks Mercer Boarini creates. Every touch, from edible artwork garnishes to Champagne foam, must aesthetically connect to the intended venue and not fall into the trap of self-indulgence. Each drink must also be concocted with Wynn’s status as a high-profile Vegas Strip resort in mind.

“One of the biggest things I have to think about when creating a drink is how to make it executable,” she says. “Whatever high concept I come up with back here in the kitchen has to be distilled to high volume so it can be replicated out there in the resort for thousands of guests.”

A Return to Normal

The desire for next-level Vegas cocktails hasn’t waned after a year of pandemic restrictions. Indeed, there’s been a clamor for Mercer Boarini’s inventive drinks and new menu concepts from locals and tourists alike as they gradually (and one would hope cautiously) return to the Wynn. This puts to rest any concerns about people rejecting fancy drinks as they return to the Vegas scene, although her program’s diverse nature can also easily meet the needs of those who wish to stick to the comforting familiarity of an Old Fashioned.

While nobody knows when things will exactly return to normal, she’s confident that her sprawling bar program will be well equipped to welcome the full complement of guests eager to plug back into the city’s singular vibe. “When people want to come to Vegas, they come here to have fun and to live out their dreams,” she says. "As a Las Vegas native, I’m very proud to be able to help them build those unique Vegas experiences through my drinks.” 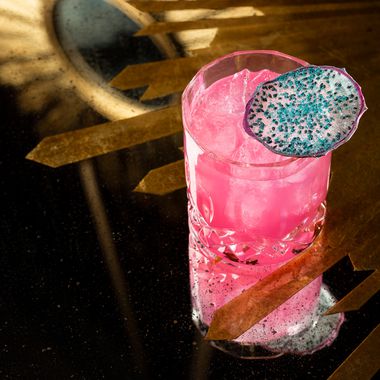