Makgeolli defies easy definition, which is part of the reason why most Americans are just starting to catch on to the ancient, hazy, fizzy Korean rice beverage. But thanks to a young generation of Korean American devotees, makgeolli (drop the g and pronounce it mahk-ol-lee) is now increasingly widely available in the States. It’s sold at Whole Foods, and you can find it at fancy bodegas, craft beer bars in Nashville and at restaurants outside of Koreatown. America’s first craft makgeolli brewery, Hana Makgeolli, opened in October in Brooklyn, and a handful of bartenders are beginning to experiment with makgeolli cocktails.

But what is it? Makgeolli is often labeled as low-ABV rice wine or beer. A common type is sweet and cheap, sold in 750-milliliter plastic bottles for about $5. But it’s increasingly available in higher-quality options with more complex flavors, as well.

“It’s important to know that, like wine or beer, makgeolli can be wildly different,” says Yong Ha Jeong, a Los Angeles sool producer who hopes to open her own brewery. “It’s such a bizarre drink. If you think it’s stuff out of plastic bottles, be open to having explosions of flavor in your mouth.”

To better understand the category, it’s helpful to start with some basic terminology. The word “sool” represents all categories and types of Korean alcohol, from plum wine and soju to makgeolli and beer, and “jeontongju” refers to traditional rice-based alcohol made with only cooked, unpolished rice, water and nuruk. Nuruk is a grain cake and the catalyst for fermentation; it hosts colonies of bacteria and yeast and several strains of koji (as opposed to the single strain of koji, Aspergillus oryzae, used in Japanese rice brewing).

Think of nuruk as the “craziest of sourdoughs,” says Jeong. “What makes makgeolli really amazing is that it works with multiple strains of microorganisms, which is why you get so much complexity.”

Fermenting rice, water and nuruk yields wonju, an undiluted, unclarified rice beverage that maxes out at 23% ABV. Wonju’s closest cousin is nigori sake. The rice sediment in wonju naturally settles, and a clarified layer known as chungju or yakju forms on top. Chungju is a sake-like beverage unto itself, and it’s also sometimes distilled to make soju. The remaining layer of sediment is called takju, which when diluted becomes makgeolli.

This brewing system is at least 2,000 years old and was driven by jesa, or ancestor worship. Members of Korea’s noble class would offer their best crops, foods and homebrewed alcohol to their deceased forebears, according to Jeong, and alcohol, particularly chungju, was the most prized offering. “You gave the clear alcohol to your ancestors and the rice solids to the peasants,” she says. Farmers and villagers took the takju and added water to stretch the drink. In lean times, it served as a meal substitute, and before it was called makgeolli, it was known as nungju, or farmer’s drink.

Still, that definition of makgeolli is incomplete. Wonju, diluted or not, can also be makgeolli. In modern homebrewing, it’s common to complete a quick one-step fermentation, known as danyangju, that yields a wonju around 12% to 14% ABV. Some homebrewers might add sugar to the brew, some dilute it, and others drink it at full strength.

More advanced homebrewers and craft producers use two- and three-step fermentation processes that boost alcohol and complexity. And it’s that type of fruity, floral, boozy makgeolli that first intrigued Jeong, who grew up drinking homemade makgeolli on her grandmother’s farm and later encountered craft makgeolli as a music anthropology student in Korea. While in Korea, she also studied the history and practice of making sool. “I’m trying to understand makgeolli from indigeous perspective and approaching it as an academic. I like to be scientific and engage in the more mystical aspects of brewing,” she says.

In contrast to Jeong’s approach, Alice Jun learned to brew from her father, who made makgeolli for the fun of it and experimented with rice varieties and nurtured a mother brew. “My understanding of makgeolli was body movements that my dad taught me. I didn’t know what yeast did. I was going from muscle memory and feeling,” says Jun, the owner and brewer at Hana Makgeolli. “Fermentation is in every aspect of Korean culture. It’s also very casual.”

Her approach at Hana Makgeolli is more vigorous and scientific, and during unexpected coronavirus downtime, Jun dialed in modern custom brewing equipment to make her first release, Takju 16, a diluted wonju. The name of the drink might further confuse novices, but Jun explains that in Korea “anything above 10% ABV is considered takju, and anything below 10% is considered makgeolli.” Her Takju 16, the product of three-step fermentation, four months of aging and bottle conditioning, comes in at 16% ABV, hence its name.

Takju 16 is unpasteurized and bone-dry with a floral melon-like nose and lactic acidity. And it’s an anomaly in the States. Until this year, unless you knew a homebrewer, it was virtually impossible to source unpasteurized craft makgeolli. Ten years ago, the same could be said of Korea, according to Jeong, but thanks to the work of a “bunch of alcohol dorks and patriotic nationalists,” a makgeolli revival started 20 years ago, resulting in sool academies, training programs and eventually craft makgeolli bars.

The Postwar Rise of Industrial Makgeolli

Korean food and alcohol culture was gutted by Japanese imperialism and the Korean War and its aftermath. “Between war and famine, restrictions on the use of rice, and consolidation in the brewing industry, the culture of craft Korean alcohol was lost for quite awhile,” says Jun.

When the Korean government banned the use of rice in alcohol production in 1965, brewers and distillers began to use whatever inexpensive starch they could source: sweet potatoes, corn, tapioca and barley. These practices gave rise to inexpensive green bottle soju, as well as a slate of cheap and cheery makgeolli that have long been available in K-towns across the country. They’re sweet and low-ABV and often come artificially flavored with peach, chestnut, banana, citrus and even cream cheese.

This style of makgeolli is by far the most ubiquitous and beloved. It is fun and easy-drinking and holds an important place in social drinking customs and postwar culture. But it doesn’t have the depth of flavor of the original. “Even after commercial brewers switched back to rice [in the 1990s], they took shortcuts, using rice flour or flavorings. The process and recipe changed,” says Carol Pak, the owner of Makku, a line of canned makgeolli.

Pak conceived Makku while working as an entrepreneur in residence for Anheuser-Busch InBev’s Beyond Beer team. While she was workshopping hard kombucha and traveling between Asia and the States, Pak tasted craft makgeolli in Seoul and began to wonder why the category had never gained a footing in America.

Makku launched in 2019, and it has been a crossover success. It’s marketed as unfiltered rice beer and sold in sleek cans that are more familiar to American drinkers. Pak works with a traditional brewer in Korea, and Makku’s ingredient list is short: rice, water and nuruk, plus fruit purée for mango and blueberry flavors.

“People who order Makku are typical beer lovers. They order it because it sounds interesting, and 99% of people who try it love it,” says Jae Lee, the chef and owner of Nowon, a Korean restaurant in New York City’s East Village.

How to Drink Makgeolli

Makgeolli is known as a group drink. It’s often poured from a kettle into metal or ceramic bowls for sipping. (The sediment leaves an attractive residue in glassware, says Jeong.) Koreans also haul makgeolli on mountaintop hikes and drink it when it rains. “I don’t know why; it’s just a mood,” says Lee. “On rainy days, you always pair makgeolli with savory pancakes.”

Now, makgeolli has emerged as a versatile beverage pairing, especially at progressive Korean restaurants. Because it’s dry and has a touch of lactic acid, Jun says her Takju 16 pairs well across cuisines, especially with salty, spicy, oily, boldly flavored dishes, but it also plays well with delicate foods. One of her favorite combinations is craft makgeolli with ripe persimmon, fresh sheep’s milk cheese and pine nuts.

Through his recently launched KMS Imports, master sommelier Kyungmoon Kim is selling bottles of premium Red Monkey makgeolli to restaurants in NYC. The drink’s pink hue comes from a red yeast strain present in the nuruk, and Kim says it has notes of rose petals, raspberries and strawberries. Kim also likens craft makgeolli to natural wine. The microorganisms living in nuruk vary from region to region and brewhouse to brewhouse and impart a sense of terroir.

When Kim served as beverage director of Jungsik in NYC, he developed what may have been one of the first makgeolli cocktails in the States, combining Kook Sang Dang makgeolli, soju, lemon and simple syrup and floating bokbunjaju (black raspberry wine) syrup on top.

The introduction of craft makgeolli expands possibilities for cocktails. Katie Rue is among the first bartenders to experiment with Takju 16. Her cocktail list at Reception Bar on New York’s Lower East Side showcases Korean spirits and flavors through the lens of Korean American identity. In 2019, she served the Golden Dew made with Kook Soon Dang makgeolli, soju to boost the proof, chamoe (a type of Korean melon) juice, lemon and honey. She reintroduced the drink with Takju 16 in autumn 2020, and because of the spirit’s proof and complexity, she eliminated the lemon and reduced the soju in her specs.

Rue still works with industrial makgeolli, though, a product much more accessible to America’s bartenders. She thinks of it as a fruit-friendly cream element but “without overpowering dairy flavor” and says that carbonation levels vary by brand, so double-check before you shake a cocktail made with it. Her Cereal Milk drink combines makgeolli, higher-proof Hwayo soju, rice orgeat, walnut milk, jujube honey and chocolate-walnut bitters, and she’s experimenting with force-carbonating makgeolli to add to highballs. 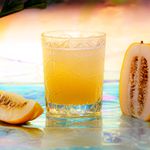 A half-mile south of Reception Bar, diners can drink makgeolli horchata at chef Sam Yoo’s Golden Diner. “We draw a lot of inspiration from the neighborhood, and the Lower East Side has a large Hispanic community. We thought it made sense to serve alcoholic horchata with makgeolli, since it’s already a rice-based drink,” says Yoo. His team makes horchata syrup with jasmine rice, sugar in the raw and cinnamon, marries the syrup with Kook Soon Dang makgeolli and strains the mixture through a superbag, then adds dulce de leche.

Lee also serves a makgeolli horchata riff at Nowon. The Makku-chata, a combination of Makku, sesame-oil-washed soju and pine nuts, is poured tableside from a kettle into metal bowls. The presentation references communal makgeolli drinking, and the flavor profile is a nod to sikhye, a sweet nonalcoholic drink made with fermented malt and rice.

“It’s my job to bring more awareness to Korean beverages,” says Lee, who hopes that his diners will come to appreciate makgeolli.