The American art of the bar had some pretty dodgy decades in the 20th century. Prohibition put a lot of the older master bartenders out of business in the U.S., while around the world, bartenders were still getting comfortable with all the various cocktails, fizzes, sours, coolers, and whatnot that made up the classic repertoire.

Many of the bartenders who were driving that process of familiarization had experience in New York, Chicago, San Francisco, Boston, and New Orleans joints. But the greatest mixologist of the mid-20th century had not only never worked in the U.S., but also, as far as we can tell, visited just once.

Constante Ribalaigua Vert was born outside of Barcelona in 1888. By 1900, his family had emigrated to Havana, where his father tended bar at the venerable cafe Piña de Plata. When Ribalaigua was 16, as he told the American author Thomas Sugrue in 1935, his father “asked him if he wished to learn barkeeping.” He said yes. By then, Cuba was swarming with Americans, and the establishment had been turned into an American-style bar called “La Florida.” In 1918, he had earned enough to assume ownership of the “Floridita”—the “Little Florida”—as it was universally known.

Apparently, when Ribalaigua told Sugrue that his “only hobby is his work,” he wasn’t kidding. He didn’t even drink. What he did do—besides inventing a new cocktail practically every day—was to make sure that his customers got the best drinks and the best service, whether they were Ernest Hemingway, Spencer Tracy, or the couple visiting from Des Moines. He was still pulling shifts when he died in 1952.

What made his tipples so special? Ribalaigua always used quality ingredients, of course. He kept up with technology and created imaginative combinations of flavors (though not too imaginative). But most of all, he was a master of proportion. I’ve tried just about every recipe included in the little pamphlet he gave out, and they have been perfect, requiring no adjustments.

The Longines cocktail is a fine example of his work: unusual, but not weird, using ingredients that blend together to form a harmonious whole. 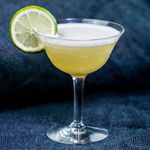 *Tea, cold and strong: Pour half a cup of boiling water over a black-tea teabag and let stand for 5 minutes. Remove teabag and discard. Chill the tea until cold.

El Presidente
47 ratings
Rate This Recipe
I don't like this at all. It's not the worst. Sure, this will do. I'm a fan—would recommend. Amazing! I love it! Thanks for your rating!