In a blend or on its own, this grape spices things up.

If you love red wine, grenache has likely found its way into your glass. Cultivated worldwide and bottled in both varietal and blend format, this hearty grape is known for its tangy fruit-driven flavors of red berries, white pepper and spice. However, grenache has quite a few identities, and not all of them are what you may think.

Grenache is a popular red grape variety cultivated all over the world. The grape is characterized by medium levels of tannin and acid, and wines produced from it are known for their spicy fruit-driven flavors.

In the vineyard, grenache is late ripening and rather high yielding, so it often requires a hefty amount of TLC. Overall, grenache has a good tolerance for windy regions and performs best in hot well-draining soils. Grenache has a long growing season, with early budding and late ripening, so when left extensively on the vine in warmer areas, it can produce wines with alcohol levels of 15% and higher.

Where Does Grenache Come From?

Grenache is believed to have originated in Spain, though today the grape is cultivated all over the worldy, notably in Australia, California, France (southern Rhône), Sardinia (where the grape is called cannonau) and Spain.

How Is Grenache Made?

Grenache is made in a variety of styles, although the biggest factor is whether it's produced varietally or in a blend. GSM (grenache, syrah, mourvèdre) blends are very common in Australia and the south of France, as the characteristics of each of these grapes work well together as a trio. In South America and Spain, grenache (garnacha) is often vinified with carignan (cariñena) to produce regional blends.

In the south of France, notably in in the southern Rhône, and particularly in Châteauneuf-du-Pape, grenache often makes up about 80% or more of the traditional regional blend, which is usually rounded out with carignan, cinsault, mourvèdre, syrah and more. The grape is also commonly used to produce rosé, notably in Tavel, the Rhône and Navarra in Spain. In Australia as well as in France’s Languedoc region, grenache is frequently used to make sticky-sweet vin doux naturel wines. These wines are produced with the addition of neutral distillate, meaning that its sugar and alcohol levels are high.

As with all wines, grenache’s flavor profiles are heavily dependent on the vinification techniques used on the juice, as well as the vessels (steel, cement or oak) in which it’s aged.

What’s the Difference Between Grenache and Garnacha?

Nothing! Garnacha is simply the Spanish name for grenache. However, a handful of variants of the grape exist. For example, garnacha peluda (“hairy grenache”) is an evolved version of the grape that has fuzzier leaves, which protect the fruit from burning in scorching temperatures. According to winemakers who cultivate this variation of the grape, the wines are generally higher in alcohol and lower in acidity than those produced from regular grenache.

Grenache also goes by the names garnatxa, garnatxa negra, cannonau, grenache noir, garnacha tinta and alicante (which is a cross of grenache and petit bouschet). The French grape marselan, first created in 1961, is a cross between grenache and cabernet sauvignon.

Grenache’s flavor profile is highly dependent on where the fruit is grown, how it’s vinified and whether it’s being produced varietally or in a blend. Generally speaking, grenache is known for its flavors of spicy red fruit, berries and white pepper. As grenache ages, the wine tends to take on a brick hue and show flavors of used leather and tar.

Which Foods Should I Pair with Grenache?

When choosing which dish to enjoy alongside grenache, consider the acid, tannin and fruit levels in the particular bottle you have. Because these characteristics vary so widely for this grape and its blends, food pairings for grenache-based wines are a bit all over the place. Generally speaking, however, grenache tends to always pair well with grilled meats and veggies, game, charcuterie boards and hearty stews (think cassoulet, goulash and beyond).

Cultivated in the heart of the Rhône Valley, Anne Pichon’s organic grenache noir is produced from low-yielding, destemmed fruit and vinified in a combination of steel and cement. Expect jammy flavors of black fruits, lavender, damp earth and pepper.

Comando G has developed a semi-cult following, and it’s no surprise why. The estate’s lifted high-toned bottles of garnacha are showing a whole new side of this hearty grape, and La Bruja de Rozas is no exception. Flavors of bright red fruits (strawberries and cherries), dried flowers and white pepper lead to a lasting acid-driven finish.

In the world of grenache, Châteauneuf-du-Pape is essentially a mecca, and Domaine de Vieux Télégraphe sits atop the throne. This world-renowned bottle is produced from a (practicing) organically farmed blend of grenache (80%), syrah (10%), mourvèdre (6%) and cinsault (4%) and is aged in a combination of oak and cement. Expect layered flavors of dark fruits, tobacco, used leather and sweet oak spice.

Produced by the late Taras Ochota, this Aussie-made blend of grenache and syrah oozes with lifted flavors of red fruits, tobacco and black tea. The wine’s insanely light body and high levels of tasty acidity make it a perfect gateway bottle for those looking to dive into the world of Australian natural wine. And if you’re looking for a 100% grenache bottling, check out the estate’s Fugazi Vineyard grenache cuvée.

A Tribute to Grace Grenache

Crafted by New Zealand native Angela Osborne, this varietal single-vineyard grenache hails from the heart of Santa Barbara County. Sunny days and Pacific Ocean breezes create perfect equilibrium in the fruit, which leads to a bright and balanced wine with flavors of red currants, plums and bramble, marked by light smoky undertones.

This juicy 50/50 blend of garnacha and cariñena is produced by Luca Hodgkinson and Jose Miguel Sotomoyor in the heart of Chile’s Maule Valley. Crafted from organic and biodynamically farmed fruit, this easy-drinking red jumps with smooth and silky of black cherries, smoke and sweet spice. 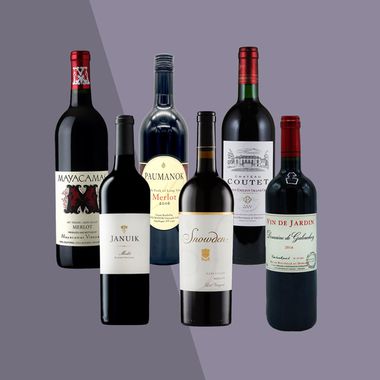