Invented by Ernest Hemingway, one of the 20th century’s most celebrated and prodigious drinkers, the Green Isaac’s Special first appears in the writer’s novel “Islands in the Stream”: “Where Thomas Hudson lay on the mattress his head was in the shade cast by the platform at the forward end of the flying bridge where the controls were and when Eddy came aft with the tall cold drink made of gin, lime juice, green coconut water and chipped ice with just enough Angostura bitters to give it a rusty, rose color, he held the drink in the shadow so the ice would not melt while he looked out over the sea,” writes Hemingway.

This recipe is taken from Philip Greene’s "To Have and to Have Another: A Hemingway Cocktail Companion," which mixes recipes, anecdotes and biographical information about the famed novelist. 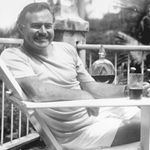