When bar guests request a “bartender’s choice” cocktail containing absinthe from Dzu Nguyen, the beverage director for Horsefeather in San Francisco, his go-to is this riff on an Espresso Martini. Its name, Death by Morning, is a play on the classic absinthe-and-Champagne cocktail Death in the Afternoon, created by author Ernest Hemingway, and Nguyen’s creation incorporates elements of both drinks.

The Death by Morning doesn’t have too much in common with Hemingway’s drink, but it does have the author’s favorite liquor: absinthe. This botanical, anise-driven spirit does not, in truth, cause hallucinations and is perfectly legal to use in the United States. Nguyen prefers to use Vieux Pontarlier absinthe from France for “its deep complexity and the fact that it’s not just pungent star anise to the face,” he says. Its notes of grassy fennel, mint and menthol make it elegant and versatile.

The absinthe forms the base of the cocktail, but it’s joined by Branca Menta—a minty take on Fernet-Branca’s flagship spirit—and coffee liqueur. These days, there are plenty of options for coffee liqueurs, and whatever you don’t use making the Death by Morning can go in drinks like the White Russian, Mudslide and, of course, the Espresso Martini.

Coffee liqueur isn’t the only caffeine in the drink—it wouldn’t be an Espresso Martini variation if there wasn’t some actual coffee in it. While the name implies you must use espresso, you can substitute cold-brew concentrate, instead. If you go this route, keep in mind that cold brew packs a potent punch of caffeine, even more so than espresso.

The drink is finished with sugar, Angostura bitters and coarse sea salt. The salt won’t make the drink salty, but it cuts the bitterness of coffee while amplifying the other elements. The result is lush, botanical, sweet and caffeinated. Hemingway would have likely approved.

Everything You Ever Needed to Know About Absinthe 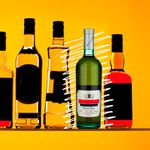