Top bartenders are embracing the vegetable for its sustainability as well as its flavor.

Corn, one of America’s staple summer crops, has long been used as a cocktail ingredient thanks to its sweet-savory flavor, vibrant color, and wide availability. But a growing number of bartenders are taking a sustainable approach to the vegetable, using not just the kernels but also the cobs, husks, and more in innovative ways. It’s no longer just about finding ways to surprise guests with brightly hued drinks featuring corn; instead, bar pros are seeking to maximize how they use the versatile ears—the vegetable equivalent of a nose-to-tail approach.

Some find corn so versatile, it appears season after season.

“I’m doing something with corn on every damn menu,” says Shaun Traxler, the general manager at Vault, in Fayetteville, Arkansas, who began working with the vegetable in cocktails about four years ago.

One of his earliest, a pisco drink called Children of the Corn, featured a corn stock that boils water with corn kernels, the “milk” scraped from the cob with the back of a knife, and the cobs themselves, reduced by half and fine-strained. Inspired by a citrus stock that anti-waste pop-up and online platform Trash Tiki made from spent citrus hulls, the goal was “to use every bit of the corn,” says Traxler.

That said, what Traxler describes as a “burning passion for corn” extends beyond just minimizing waste: It’s also about using what’s local. “Corn grows like weeds all over the country,” he says. “When we’re flying in fruits and avocados from Mexico, why not use something that grows abundantly in this country?”

A more recent creation for Vault’s spring 2022 menu is the Nance Nance Revolution, made with Jamaican rum, yellow cherry-like nance fruit, banana liqueur, and a blend of fresh and creamed corn sous-vided into a syrup.

Elsewhere, Leanne Favre, the head bartender at Brooklyn’s Leyenda, working with Shannon Ponche (who is no longer with Leyenda), developed a “Champagne corn cob syrup” to flavor a tequila-and-sherry drink called The Vixen. 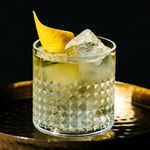 “The corn cob element came from thinking about things in [Leyenda’s] kitchen that might not have been used,” she recalls. (That said, Leyenda’s chef already uses corn cobs in the bar’s vegetable stock, Favre notes, but saves some for the drink, too.)

While boiling corn cobs releases an appealing sweet flavor, Favre says it’s also about the texture it provides. “Corn starch released from the cob provides a silky texture I almost relate more to honey,” she says.

For Tim Wiggins, the co-owner of St. Louis, Missouri’s Lazy Tiger, the “ease and versatility” of corn is what appeals. “It adds a cool flavor, but it’s also incredibly mild,” he says, adding that it works with a wide range of spirits in both sweet and savory applications. Further, “it takes heat and char and bitterness well,” he explains.

That versatility led to the Yellow Corn Paloma at Lazy Tiger, an outgrowth of a pandemic-era deep dive to repurpose ingredients and cut waste.

Instead of fresh corn, Wiggins used masa, a flour made from ground, nixtamalized corn kernels, which had been left over from making taco shells at the restaurant prior to the pandemic. The masa was fermented with housemade koji and piloncillo, then turned it into a syrup with Mexican cane sugar. “It tasted good, like toasty tortillas,” he says.

To that toasted masa syrup, Wiggins adds a complex mix of grapefruit soda, Zucca amaro, aged rum, tequila, pox (a Mayan corn and sugar cane spirit) and a vegetal mezcal that has “salsa verde vibes.” Wiggins describes the flavor of the finished drink as a “charred vegetable taco Paloma.”

Of course, corn isn’t limited to bespoke syrups and stocks; it’s long been distilled into whiskeys (hello, bourbon, Mexico’s Abasolo, and moonshine, among others), as well as creative spirits ranging from liqueurs (see Nixta Elote, a current bartender darling) to pox. Yet, bartenders still feel compelled to fold the many iterations of maize into creative combinations, including many that aspire to addressing sustainability concerns. What was once dismissed as a mere commodity provides endless inspiration that extends beyond corny jokes to fresh, summer-soaked drinks that inspire.