Bar pros share their tips for making delicious drinks with the unexpected ingredient.

For many people, cheese is one of life’s greatest pleasures. It comes in an array of styles and potencies, and often functions as the ultimate complement to wine, beer, and even cocktails.

But mixed in a cocktail? If you’re skeptical, you’re not alone. Nonetheless, some innovative bartenders have found ways to manipulate cheeses into liquid forms to use in cocktails. And, to the surprise of many, this unusual ingredient works extraordinarily well.

“The world of cheese is enormous, and I believe there’s a place for it in cocktails,” says Hyacinthe Lescoët, the co-founder of The Cambridge Public House in Paris. “More than just flavor, it brings texture and depth to a cocktail, because of its fat and salt content, in a way that’s difficult to achieve with other ingredients.” She notes, however, that as a cocktail ingredient it needs to be used the right way and in the right proportion to make the drink’s other flavors shine rather than overpowering them.

“As bartenders, we are always looking for new ways to innovate and push boundaries, but sometimes we can struggle to find creativity in the ingredients we know,” Lescoët continues. “Cheese is the new frontier because, much like spirits and liqueurs, the world of cheese is constantly growing with more and more interesting varieties of cheeses coming to the market.”

When creating a cocktail that includes cheese as an ingredient, there are a few factors to consider to ensure you capture its best qualities. Start by deciding which type of cheese you’re hoping to use and the characteristics you want to extract from it, as well as its potency and whether it’s hard, soft, or milky. “As is the case when processing various herbs or spices, different varieties of cheese call for different ways to transform them into a liquid ingredient,” says Lescoët. “The distinction between cheeses is important.”

At Two Schmucks in Barcelona, bar manager Juliette Larrouy, who has a culinary background, has worked with a variety of cheeses in drinks across several menus. Most recently, she debuted her Melon, Cheese & Pepper cocktail, inspired by her upbringing in the southeast of France, where melon, balls of mozzarella cheese, and black pepper were often served as a pre-meal hors d’oeuvre. The cocktail, which is split into a cantaloupe-flavored base comprising gin, dry vermouth, and cantaloupe cordial, and a top layer of mozzarella foam—a form that captures the essence of the cheese and its distinct milky texture—strikes a unique balance: exciting and approachable for casual bar-goers, yet “nerdy” enough for cocktail sophisticates. 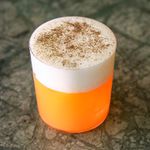 “We chose a milky soft cheese made from mozzarella—stracciatella, the inside of the burrata—for the Melon, Cheese & Pepper cocktail because it’s playful and not overly intense in a cocktail,” says Larrouy, emphasizing the importance of not making the cheesy component of drinks too intense, as it could be off-putting to guests. “The cheese foam adds a nice contrast in texture from the melon cocktail base, much like the dish from my childhood.” The team tried many techniques for integrating the mozzarella component, and ended up going with a foam “because it was the best method for showcasing the delicate ingredient,” she says. The cocktail is made without any citrus juices; the acidity, which lifts the fresh cantaloupe flavor, comes from the vermouth as well as the citric acid powder that’s mixed into the cantaloupe cordial.

In addition to milky cheeses—which Larrouy says also work well as a replacement for cream in a Ramos Gin Fizz-style cocktail—bars have even dabbled with soft cheeses such as cream cheese, ricotta, and blue cheese. At Fat Schmuck, Two Schmucks’ all-day sister bar, Larrouy revisited her love for cheese by developing a raspberry cheesecake cocktail. It’s a clarified milk punch that employs Philadelphia cream cheese as the clarifying component, along with bourbon, vodka, amontillado sherry, butter, citrus zest, vanilla, a sweetener, and lemon juice to curdle the cheese for clarification. The drink is garnished with a raspberry purée rim set with agar agar. “We wanted a textural drink, so while we also tried a foam, the milk punch worked best to capture the flavors and mouthfeel that we were going for,” says Larrouy. “It very much tastes like a cheesecake.”

Similarly, at The Cambridge, Lescoët and her team employ a rum fat-washed with both olive oil and ricotta in the bar’s latest cheese-laced drink, the Calabrian Summer, which is made with ricotta, strawberry-and-black-pepper syrup, olive oil, white rum, and citrus. “We had these amazing strawberries coming into season and we wanted to create a more complex Strawberry Daiquiri, but with a round and delicate mouthfeel,” says Lescoët. “The team had the idea to fat-wash rum with Italian olive oil to bring more length before washing it with ricotta for extra creaminess and saltiness. Instead of having your usual sharp and acidic Daiquiri, you get the fruitiness of the strawberry alongside the spiciness of black pepper, before getting the creaminess and saltiness from the olive oil and the ricotta, which just makes you want to have more of it.” The cocktail is garnished with a blend of dehydrated ricotta—the remnants of the fat wash—and dehydrated basil turned into a powder, producing a cocktail that eliminates as much waste as possible.

At Martiny’s in New York City, co-founder and bartender Takuma Wantanabe uses mascarpone cream to make his take on liquid dessert in a cocktail named Tiramisu. “Since we don’t have a dessert menu yet, I wanted to create a dessert cocktail,” says Wantanabe. “When I checked the ingredients necessary to make Tiramisu, I noticed that it has mascarpone in it, so I made foam with it, adding heavy cream and coffee.” The bourbon-based cocktail also employs egg white, cocoa, and a Japanese brown sugar.

So, what about hard cheeses? While just about any could be tried in cocktails, parmigiano seems the most popular option—likely because of its familiarity as well as a flavor that pairs well with a wide range of ingredients. The key to working with hard cheeses is to be gentle if processing them with heat, as high temperatures can destroy the aromas of the cheese. For that reason, fat-washes or cold infusions with the rinds are generally the best techniques to employ.

At Double Chicken Please in New York, the Cold Pizza cocktail is a blend of layered ingredients that create a cocktail greater than the sum of its parts. “Initially the idea came from making a drink called Margherita Margarita,” says GN Chan, the bar’s co-founder. “We wanted the drink to be focused on tomato, basil, and tequila, but adding parmigiano as a savory element gave the cocktail another dimension of flavor and depth.”

The Cold Pizza’s ingredients are listed on the menu as Don Fulano blanco, parmigiano reggiano, burnt toast, tomato, basil, honey, and egg white—essentially a savory sour-style cocktail. To integrate the parmigiano into the drink, Chan makes a cheese-and-brioche-infused tequila by darkly toasting the brioche, then blending it with the cheese and tequila in a neutral container. The mixture is left overnight before it’s fine-strained through a chinois and cheesecloth, yielding a spirit that is as vegetal as it is bready and cheesy.

Meanwhile, Coupette in London features a housemade parmigiano liqueur in its Ain’t Being Cheesy cocktail. The liqueur is made by delicately cooking the cheese with verjus, sugar, and a spirit via sous vide to yield an ingredient that strikes the perfect balance of fat, acid, and salt; it’s then mixed with olive oil-washed Maker’s Mark, mead, and liquified raisins in a cocktail served with a parmesan crisp, which is made from the solids left over after making the liqueur.

“With food-focused drinks becoming increasingly popular, cheese will undoubtedly make its way onto more cocktail menus in the future,” says Lescoët. “Cheese is a wonderful ingredient, but there’s a fine line between making it delicious and making it disgusting. It’s all about finding the right balance.”