In June, in the wake of George Floyd’s murder, protesters coursed through the Hyde Park neighborhood of Chicago. To show their support, Racquel Fields and her family sat outside 14 Parish, her Caribbean restaurant and rum bar. She opened the restaurant’s restrooms to the community and witnessed a police standoff outside her front windows.

Fields had just moved 14 Parish from Chicago’s South Loop to its new location in April. She had to lay off most of her staff but limped through spring with an encouraging amount of takeout and delivery.

Then a media surge hit as magazines, news outlets and independent groups published lists and maps of Black-owned businesses. Fields’ takeout orders immediately rose, and lines formed around the block for 14 Parish’s Juneteenth celebration. “We definitely felt the energy of the community wanting us to thrive, especially as a Black- and woman-owned business,” she says.

Across the country, Black bars and restaurants experienced similar bumps in business as the wider public began to contemplate America’s racism and began to act. Owners credit the support with helping them rehire staff, expanding their communities and validating work that has long been overlooked and undervalued.

But among Black bar owners and the adjacent community, the message remains: More work needs to be done. “If it’s only going to be a performance, don’t waste our time,” says Jackie Summers, a writer, speaker and America’s first licensed Black distiller. “We have seen people do this song and dance before. Unless you institute policy change, play something else.”

Marva Babel estimates that the exposure and word-of-mouth marketing stemming from the Black Lives Matter movement boosted sales 5% to 8% at Ode to Babel, the Brooklyn bar she owns with her sister Myriam Babel. Before the pandemic, Ode to Babel served as a living room of sorts for the creative community in the Prospect Heights neighborhood of Brooklyn, and in summer 2019 its patrons helped save the bar’s liquor license from being suspended in the face of neighborhood gentrification.

Ode to Babel guests look a little different these days. “We expanded who comes to the bar in a really nice way. We have even more Black guests, people of color and LGBTQ folks,” says Babel. “We also have a lot of allies, White ladies. We’re even getting White guys. I never thought they would hang out and chill with us, but it has become a conscious effort.”

The Babel sisters’ experience isn’t universal, however. This summer, Edouardo Jordan recorded his highest sales numbers ever at JuneBaby, his Southern restaurant in Seattle’s Ravenna neighborhood. (Jordan’s Lucinda Grain Bar has been closed since March, and his first restaurant, Salare, fed industry workers as part of the Lee Initiative until this fall.) He says the causes for the spike were twofold: Shifting to a takeout model allowed him to increase the restaurant’s volume, and increased awareness from the Black Lives Matter movement also propelled demand.

Takeout business has since slowed, and Jordan suspects that diners feel like they did their part with a one-and-done order. “It’s daunting to know there were enough people to support us and give us a big push,” he says. “But where did they all go? We were doing record takeout, and then it’s like, Oh, OK, Black lives don't matter anymore. That’s what it feels like.”

While lots of publications called for solidarity with Black businesses, the listicles they published did little to explain the systemic issues faced by Black entrepreneurs, in particular the difficulty of accessing funds through traditional lending. While fundraising for Salare, Jordan went to six banks to seek out a loan. Five told him no on the spot.

To be considered for loans, Black entrepreneurs have to supply more paperwork than their White peers. They also start off with a third less capital, according to global consulting firm McKinsey. That makes their ventures more precarious from the start. It also means that Black bar owners often don’t have the capital to build out glossy spaces with high-end equipment and lighting—the types of touches that attract press in the first place.

“We’re not seen as people who can run our own companies; we’re still seen as laborers,” says Summers. “People are still trying to profit off your ideas without compensating us for our creativity. It’s in everyone’s best interest to change the model.”

Ode to Babel was among the lucky 2%. “PPP funding helped us get our to-go program up and running,” says Babel. “I could pay people to make, bottle and deliver drinks. It shows exactly why these types of things are important.”

Oakland chef and restaurateur Nelson German opened Sobre Mesa, an Afro Latino cocktail lounge, on March 5 and shut it down a little more than a week later. His first restaurant, Alamar, had to carry both businesses for a time. Along with the tide of support for Black-owned businesses, German’s takeout sales rose 25% to 30%. The boost allowed him to hire back staff and reopen Sobre Mesa with an expanded customer base.

Through marketing efforts from Doordash and Caviar, German also got to tell the story of his food that’s rooted in traditions of Africa, the Dominican Republic and Spain. Delivery companies aren’t exactly beloved by the hospitality community, but they offered him no-cost marketing and lowered his fees and continue to reach out to see how they can help. “So much of the community’s business was due to the fact that we were showcased on these platforms. A lot of us can’t afford advertisements,” says German. “It obviously looks good for these companies too. But some of them have big, diverse staffs that we don’t know about and appreciate Black businesses.”

As the rallying cry to support Black lives expanded to Black businesses, Clay Williams was ambivalent. Williams is a cofounder of Black Food Folks, a fellowship of Black hospitality professionals whose Instagram followers ballooned from 10,000 to 30,000 in a month. “There was this idea that suddenly people discovered Black people,” he says. “It struck me as a lot of posturing and virtue signaling, especially coming from organizations I knew hadn’t put in work to support us in the past.”

Williams and cofounder Colleen Vincent built Black Food Folks as a self-sustaining community, prepared to do the long and steady work of uplifting Black industry talent. They’ve emerged as leaders over the past few months, and big donors noticed. Discover Card worked with Black Food Folks to spread the word about a $5 million grant fund for Black restaurants, and together with Talenti, the organization recently distributed $5,000 grants to 10 Black food businesses.

“These are the sorts of things that work. It’s one thing to highlight a business, but this is actively putting your money where your mouth is,” says Williams, who’s still skeptical of the media's commitment to lasting change. If all the editors, writers, publishers and ad people are White, Black lives and talent are nothing more than a trends piece, he argues. “When Anna Wintour is replaced by Elaine Welteroth, let’s talk.”

Babel has already noticed a decline in diversity across social media channels. For two weeks, she saw a brilliant parade of Black people, LGBTQ folks and faces from the larger BIPOC community. “We have to continue normalizing Black owners and people of color in publications,” she says. “It’s important that we hold these entities accountable.”

Photographer and writer L. Kasimu Harris has chronicled New Orleans’ Black bars, and their decline, for years. His work was inspired by a drive down St. Bernard Avenue in 2017. Looking out the window, he saw that all but one of the Black-owned bars had flipped to White ownership. He remembers visiting another Black bar in 2016. A birthday celebration and the second line took over the space. “Two years later, it had turned completely White, devoid of past history,” he says. “I tried to look up the bar, but no one had written about it. No one thought it was important to document these bars or their lineage.”

Such is the case of Sportsman’s Corner, which opened in the 1960s and is a longstanding second line stop, a gathering place for Black Masking Indians, and the official home of The Young Men Olympians club, a benevolent association. Despite its importance as a cultural hub, Sportsman’s Corner was excluded from the city’s lists of Black-owned businesses.

Sportsman’s Corner owner Theresa Elloie died from COVID-19 in March, and though her son Steven Elloie now runs the bar, Harris fears the day when the corner of Second and Dryades Streets will fall from Black hands. “There’s ancestral DNA there. It’s a place where people can practice their culture,” he says. “What happens if there’s no Black-owned spot where Black people can gather? So go the bars, so goes the culture, so goes New Orleans.”

14 Parish’s Fields thinks that much of America is still threatened by the full-throated expression of Black culture, without recognizing how it shapes the music we listen to, the clothes we wear, the bars we visit and the cocktails we nurse. Her remedy: demanding diverse media at all costs, investing in Black businesses and communities, getting Americans to love Juneteenth as they do Cinco de Mayo and recognizing Black genius and excellence.

“There has always been this undertone with Black businesses that people are reaching down. They’re throwing you a bone, like you don’t have a quality product. I felt like anything I did wrong would be attributed to the fact that this is a Black business,” says Fields. “But for the first time, this summer, I really felt like the community was embracing us and saw value in what we had. This is not charity. Dining and drinking with us is something you should be proud to do. It enriches you.” 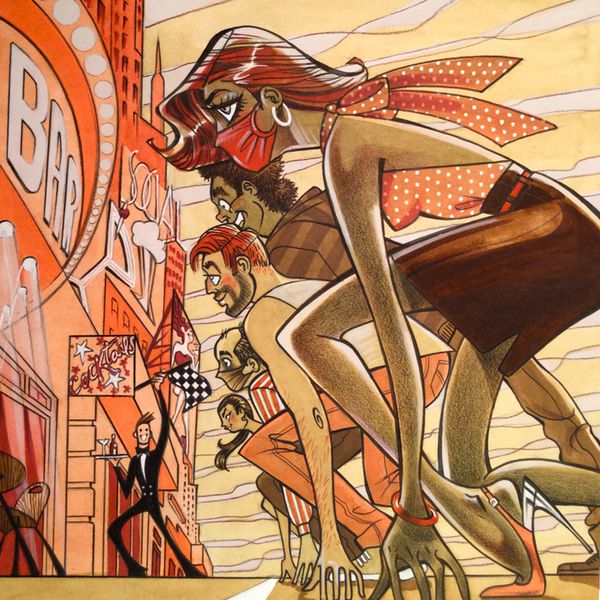 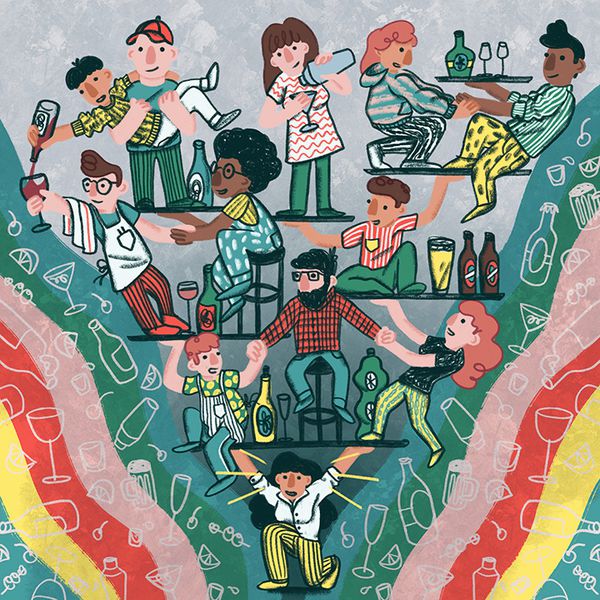 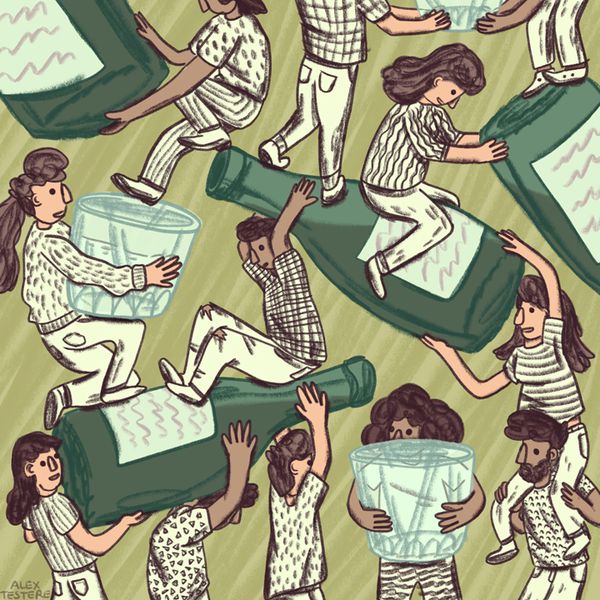