These bartender-approved bottles can help you customize this brunch fave.

The jury is out as the origin of its name, but the spicy, tomatoey vodka drink called the Bloody Mary is commonly known to have been created by a Paris bartender named Fernand Petiot, who whipped it up in the early 1920s at the renowned Harry’s New York Bar in Paris before taking it stateside a decade later. Petiot’s version was simply 50/50 tomato juice and vodka.

Today, the drink, a staple of brunches the world over, is much more complex—spicier, more vegetal, and sometimes elaborately garnished. But that doesn’t mean there aren’t parameters to follow when you make the drink. Want the best advice? Just listen to Anthony “The Professor” Baker, an alumnus of New York bars The Aviary and The Grill: “Don’t use tomato juice. It has too many preservatives in it, and the vodka and ice dilute the drink enough. Blend canned tomatoes, and use that purée to counterbalance the dilution.”

Baker’s other tips: Try something other than regular salt: celery salt, or smoked salt, which makes it “more like a meal.” And forgo prepared horseradish. “It has vinegar in it, so it makes the drink taste sour,” says Baker. “Grate fresh horseradish to add spice, instead.” He also cautions against overdoing the garnishes. Crisp celery, cheese-stuffed olives, cherry tomatoes, or a cornichon is all you need to highlight the full-flavored drink.

Most importantly, choose the right vodka. Baker has two rules for the booze: Select a clean, brisk vodka that gets out of the way of the other ingredients. (“There’s enough going on in the drink already. You want to taste the cocktail; not the vodka.”) Or, grab a flavored vodka whose taste meshes with the Bloody Mary’s spice and savoriness. “You don’t want to be overwhelmed, but you do want balance,” he says. To help you choose from the vast array of bottles on the market, here are the best vodkas to help you customize some legendary Bloody Marys.

Made using wheat and barley run through high-copper stills heated by sustainable, geothermal power, Reyka gets filtered through lava rock and diluted with pure glacial spring water. “It’s the cleanest vodka I know,” says Baker. “You can drink it on its own.” But instead of throwing it back neat, try it in an “amazing” Bloody Mary, where the brisk, crystalline spirit “counterbalances all the other flavors of the cocktail.”

“It does have a distinctive spice, so it blends in well, and you barely taste the alcohol,” says Baker of this mild-mannered go-to for a homemade Bloody Mary. Abou-Gamin notes the black pepper in it, while Baker finds white pepper and dried red pepper flakes, but none of them are overwhelming. That’s perfect because the best Bloody Mary “brings mild heat,” says Baker, without ruining your palate for the rest of the brunch.

Though Baker says he “definitely stays away from expensive vodkas for Bloody Marys, because the ingredients can smother the spirit,” no mixologist can resist using Absolut Elyx for any drink. As Tony Abou-Ganim, mixologist and author of Vodka Distilled, points out, this Swedish splurge has a “brightness” that “elevates” the grain in it, as well as any flavors it’s paired or blended with: pickled herring, strong cheeses, and, yes, the horseradish, tomato juice, and Worcestershire in a classic Bloody Mary.

Especially in a Bloody Bull—a Bloody Mary enhanced with beef broth—Abou-Gamin thinks this vodka is “gorgeous.” With a base spirit distilled from organic wine grapes, then infused with a mix of locally sourced, organic chilies, this Sonoma bottle offers “beautiful, honest flavors,” he says, with a fruity sweetness overlaid by “something delicious and savory.”

This Oregon potato vodka is infused with the brunch-friendly flavor of bacon. Launched back in 2009, it is, in fact, the world’s first-ever bacon vodka, and it fits Baker’s criteria for mixing into a Bloody Mary.

“If you’re going to make a vodka with a characteristic that stands out, make it one that helps it blend in with the other ingredients,” he says. Bakon’s smokey, meaty, slightly sweet flavor is “appropriate for a cocktail that should taste like a meal in a glass.” Garnish the drink with a blue cheese–stuffed olive.

For a brisk, summery version of a Bloody Mary, try juicing cucumber and combining it with the tomato juice, fresh mint, and this botanical vodka. Crisp, lively, and at just 60 proof, “smooth and friendly,” “refreshing and easy,” according to Borisov, it brings a garden-fresh lightness to the otherwise hefty drink.

Distilled from non-GMO grain, jalapeños, lime peel, and cilantro, then infused with yellow and red bell peppers, serrano peppers, and habaneros, this vodka offers a burst of flavor. “Gently spicy,” yet replete with herbal and vegetal notes, it’s “a great base for cocktails,” in Borisov’s estimation. It adds nuanced heat and brightness to a Bloody Mary.

Based on Dankowski Gold rye, distilled only three times, and filtered just twice, this single-estate vodka offers “notes of honeycomb and white pepper,” says Slava Borisov of Chicago’s Travelle at The Langham.

Those “big, bold, and robust” flavors, as Abou-Gamin describes them, bring verve to Sunday afternoon’s Bloody Mary, while the vodka’s velvety mouthfeel helps the drink go down smoothly.

For a Bloody Mary, “look for something that blends very well and doesn’t stand out too much,” says Baker. “The vodka should not be too strong, or the bitterness will overpower the drink.” He goes for “something subtle,” like “super-smooth” Dixie. “It’s perfect because the purpose behind it is to allow you to taste the tomato and other flavors,” he says, while its creamy consistency adds silkiness to the drink.

“Peppery but with a really elegant texture," this “gorgeous” vodka is a favorite of Abou-Gamin, who enjoys its “silky-smooth” body, “complex, layered flavors,” and “long finish."

As with other premium Russian distilleries, the makers of this bottle “leave a certain amount of minerality on the finish,” he says. That helps balance out the tomato sweetness of a Bloody Mary and makes it great for a Bloody Caesar, a version of the cocktail that includes clam juice. 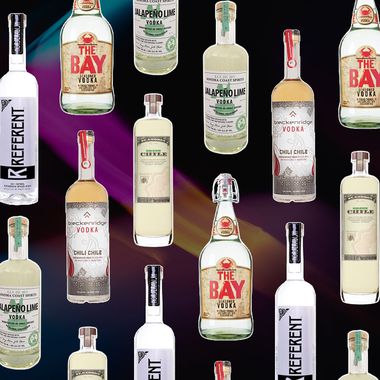