The finest bottles of Scotland's premier spirit from blended to singles malts.

“You can have a single malt in America, Japan, Taiwan or elsewhere, but to be scotch, it has to be made in Scotland,” says Tommy Tardie, owner of New York's The Flatiron Room and Fine and Rare. But that’s just a starting point—there’s plenty of diversity to the nation’s signature spirit, including single malts, which are made with malted barley, and blended scotches, whose mash bills include other grains.

The world of scotch is also evolving, with restless distillers nowadays playing around with various categories of the whisky, from heavily-peated smoke bombs to sherry-cask whiskies. “There’s been a blurring of the lines in terms of flavor profiles, and there’s more experimentation going on,” says Pedro Shanahan, spirits guide for Los Angeles bar group Pouring with Heart. “It’s exciting—it makes it more of an adventure for a novice who wants to start exploring scotch.” From the Highlands to the isle of Islay, here are the best scotch whiskies to get you started.

With notes of cedar, chocolate-covered cherries, pecans and honey, The GlenDronach Revival 15-year-old scotch “evolves in layers and layers of new flavors and keeps on delivering,” according to Tardie, following through with its seemingly miles-long finish.

Aged in the Highlands in Pedro Ximénez and oloroso sherry casks, it starts off with a spiced fruit nose that Tardie calls “brilliant.” Drink it neat with milk chocolate or aged cheeses, or, as he suggests, "drop an ice cube in and let it sit for a few seconds and see what happens."

For a reasonably-priced option, look no further than this whisky from Aberfeldy, a Central Highlands distillery that started operating in 1898. The facility is situated along the Pitilie Burn, a lively stream whose churning, fresh water results in a clean, brisk scotch.

An everyday pour, this whisky offers cherry cola aromas with a mouth-coating, mid-palate sweetness that finishes in bittersweet, woody tannins. Easy to drink neat, on the rocks, with a splash of water, or mixed into warming cocktails, it’s light enough at 40 percent ABV for a midday tipple, yet flavorful for post-work happy hour.

Bringing together the best of Scotland’s opposing traditions, this cherrywood-colored scotch from Bowmore, Islay’s oldest distillery, is made with heavily peated malt from island-grown barley. It’s aged primarily in bourbon barrels, but its final three years are spent in oloroso casks, where the scotch takes on its sherrylike layers.

“I love that it captures both,” says Tardie. “It’s the perfect balance: salty but sweet.” Toffee, dried fruit and swarthy smoke are finished with ocean-water salinity for what Tardie calls a multidimensional treat. “I’m not big on dessert, but if I were to have a dessert, this would be it," he says.

Glenfarclas, a sixth-generation, family-owned distillery, makes "super-affordable, super-balanced scotch," says Shanahan. Their 25-year-old scotch whisky is a citrusy, chocolatey libation, made with spring water that runs down the Speyside heather-covered hills—giving Glenfarclas its name, which means “the valley of green grass.”

The distillate is aged in oloroso casks for a nutty, sherry finish that is perfect for sipping after dinner. At less than $10 per year of aging, Shanahan points out, “you can’t beat the price.”

Made in Islay, Lagavulin's Distillers Edition scotch whisky has a distinctive, terroir-driven character: “beautiful, tarry rope and iodine and seaweed and peat,” describes Shanahan. “Smoked, phenolic earth and brine.” But the distiller threw a curveball for this special edition, transferring the scotch near the end of its 16 years of aging into barrels that once held Pedro Ximénez, “so you start to see this wonderful, new balance created in the arcing nuance of the sherry,” says Shanahan. “It’s a challenge for your palate—the peaty notes come across strongly in the nose, but once you sip it, you’re taken aback by the fruitiness. It’s one of my favorites.”

As more and more cask-strength whiskies enter the market, everyday tipples are muscling up. Undiluted for extra potency at Laphroaig, an Islay distillery, this decade-old scotch whisky has a proof of around 112 (may vary with each bottle). Aged in old bourbon barrels, barrier-filtered, and bottled straight out of the cask, it’s as smoky, grassy and earthy as its lighter 10-year counterpart, but with a bit of island brine and an extra burst of fire. "It’s absolutely phenomenal,” says Shanahan.

The first addition to Ardbeg’s foundational range of scotches in a decade, this 2017 introduction is named after the Mull of Oa, a rocky peninsula on the Kilodalton coast where the distillery is located. This affordable bottle is as approachable as Islay whisky gets, thanks to the balance that the former sherry barrels bring to the salty smoke.

“They’re taking a super-peaty whisky and taming it with beautiful wine-cask,” says Shanahan. “There’s no age on it, but still, it’s brilliant.” It’s a great introduction to the island’s style.

A century ago, many Scottish whiskies were made with grains, including corn and wheat, but declined in popularity as big producers started focusing on single malt whiskies. Maverick whisky maker John Glaser rehabilitated it, searching out old grain barrels and blending them together in making Compass Box Hedonism.

H. Joseph Ehrmann, owner of San Francisco’s Elixir Saloon and co-founder of Fresh Victor, calls it “a head-turner that can open your eyes to the pleasures of grain whisky.” With its coconut and caramel notes, “it tastes fun,” says Tardie. “Glaser’s doing a wonderful service for blended scotch.”

“[Glenmorangie] did something innovative,” says Tardie. “They toasted the barley so much that they call it a chocolate malt.”

Just as in beer making, where a chocolate malt adds mocha flavor to a porter or stout, this Highland scotch is rich in cocoa and espresso notes that only deepen over time. It’s made from the distillery’s oldest whisky—35- to 40-year-old scotch, aged in American white oak—which gives it a gravitas that Tardie appreciates. “As you sip it, and as the alcohol burns off,” he says, “there’s a strong characteristic of dark chocolate and coffee grinds.”

The whiskies from Glenmorangie pair so well with food, Tardie remarks, "I'm convinced that the distiller is more of a fan of wine than whisky.”

Produced using estate-grown malted barley and matured 15 years in American oak ex-bourbon barrels, this lithe, floral scotch complements a variety of summertime meals. Open the whisky up with some water and try it with marinated grilled chicken, barbecued spare ribs, mint-laced salads or fresh berries for dessert. Its honey-blossom nose leads to vanilla and roasted nuts, a delightful herbaceousness, and a hint of orange.

Want to get in on the ground floor with a new distillery? Only the second-ever licensed facility on the Isle of Skye, Torabhaig opened in 2017, and its first release, this single malt blended from 100 select barrels, is young but delightful. The heavy peat character is tempered by a brisk sweetness from the pure island spring water used to make it and the Kentucky bourbon barrels used to age it. The honeyed vanilla char of the wood mingles with isle seagrass and iodine for a whisky made for sipping or stirring into drinks.

A classic Islay scotch subjected to a Highland treatment, i.e. secondary aging in Amoroso sherry butts, this bottle is, at first, “big, peaty, and smoky,” says Shanahan, but then, “you start to see this wonderful new balance created. You get these fruit kickers coming through without being too cloying, but they’re added to the peaty notes of the scotch from the isles.”

The sherry-cask fruitiness softens yet also highlights the peat, “reminding you of the earthy elements” in the scotch, he concludes. Don’t be afraid to pair this one with food. “Those heavily peated, oily, viscous scotches love seafood or meat,” says Tardie. “One of my favorite pairings is oysters and peated scotch.”

For cocktails, says Tardie, you shouldn’t complicate things. “Stick with something on the cheaper side,” he says. But that doesn’t mean you can’t go for excellence and flavor.

Aged in ex-bourbon barrels, so it’s “not a sherry bomb” like some Speyside scotches are, this one is light and easy at a relatively low alcohol level. Floral on the nose with a bittersweet palate, “it’s not too powerful in any one direction,” says Tardie, “but it’s diverse enough to throw a cube in, sip neat, or put into a rusty nail.”

On the palate, scotch is a journey that replicates the making of the spirit, from the grain to the malt to the wash to the whisky, and GlenDronach Revival 15-year-old (view on Reserve Bar) exemplifies that layered, complex experience.

What is the difference between scotch and other whiskeys?

All scotch is whiskey (or, as they spell it in Scotland, whisky), but not all whiskeys are scotch. For whiskey to be scotch, it must be made in Scotland.

How is scotch made?

Like all whiskey, scotch is distilled from grain. In order to access its starch (which the yeast will convert into sugar during fermentation), the grain is malted, or soaked, so that it sprouts. The sprouted grain, or malt, is then dried in wood- or a peat-fired kiln. Next, it is milled, mixed with hot water, and fermented. The resulting “wash” is run through a copper-pot still, normally twice. The distillate that comes off the still is then aged in barrels, often for many years, to produce the deep, intense spirit we call scotch.

What are the different types of scotch?

Scotch made from malted barley at a single distillery is called single malt scotch. Blended scotches are produced by blending single malt with whisky made from other grains. That’s the most basic distinction in scotch. But it’s not the only one to consider. There’s also geography. Highland scotches tend to be sweeter than smoky island scotches made from peated malt. Finally, there are the barrels. Used sherry casks impart different flavors than bourbon barrels, and the number of years a scotch spends in the barrel distinguishes it too. 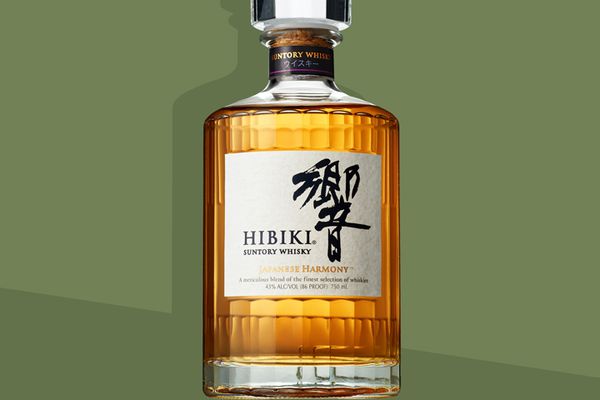 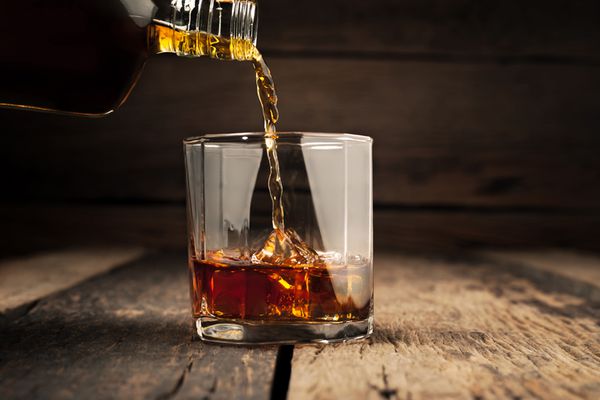 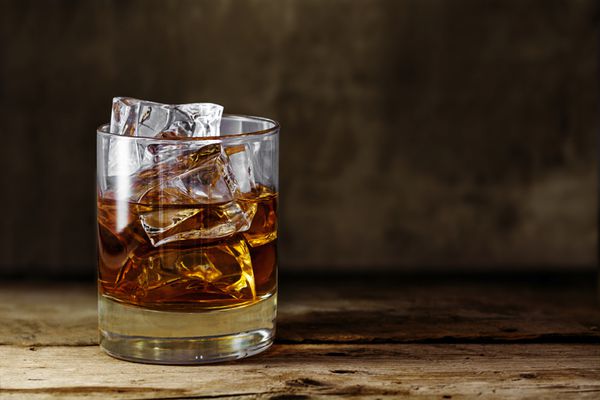 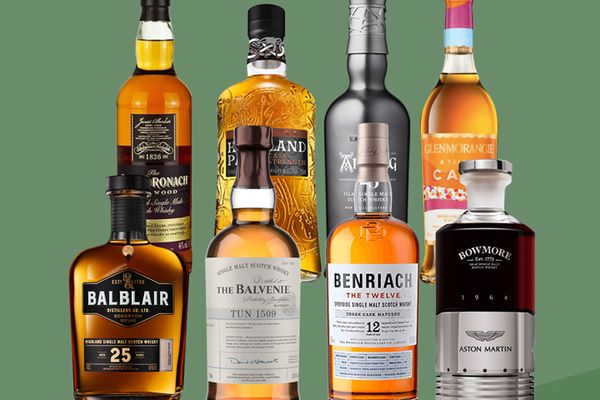 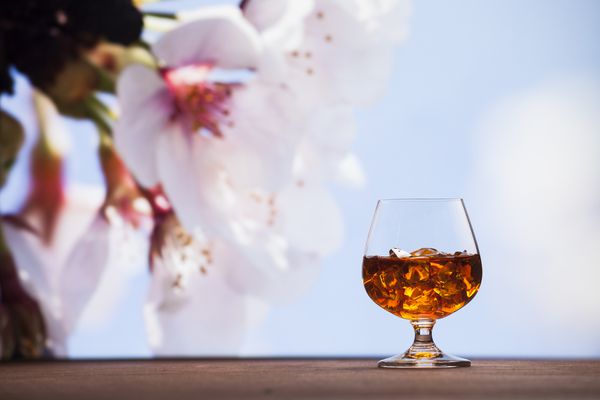 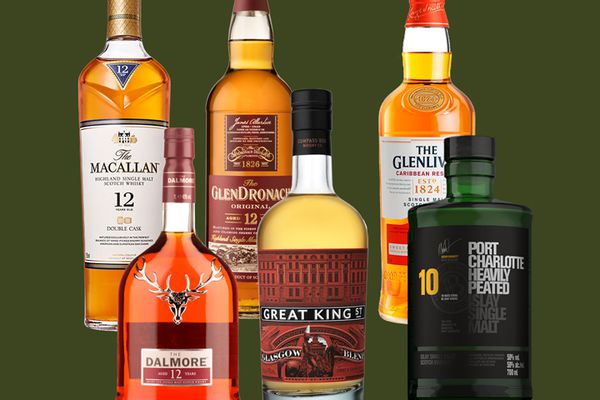 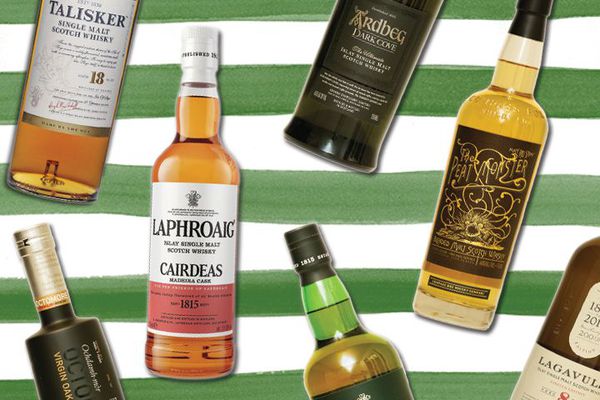 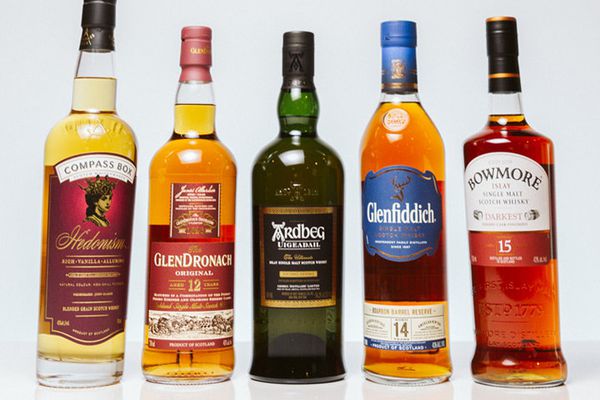 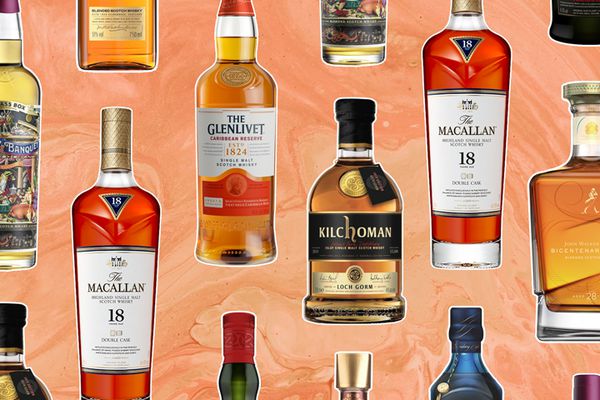 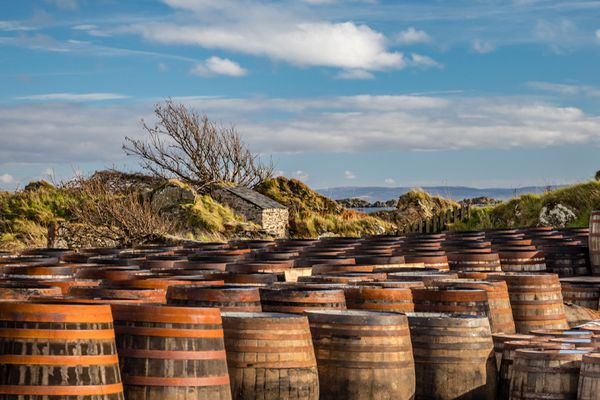 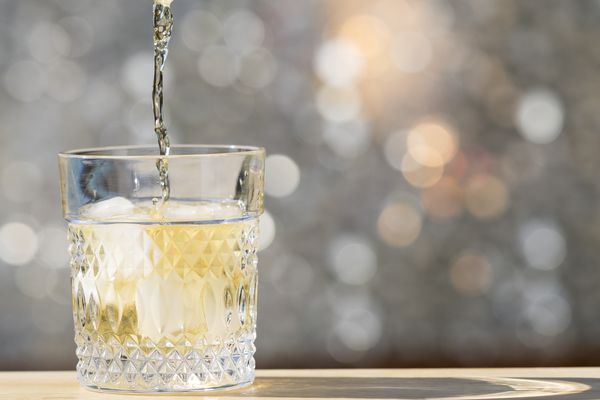 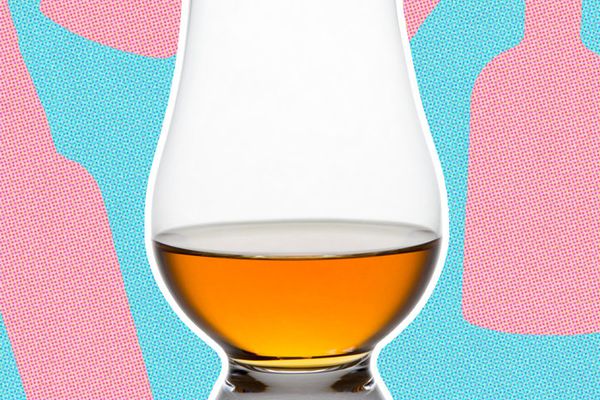