From organic to flavored vodkas, these are quality bottles on a budget.

"Many cheap vodkas have a bite to them," says Anthony Baker, The Cocktail Professor, and what he describes as "a stench." Maybe that's why, the high-profile Manhattan bars where he has worked, including The Aviary and The Grill, Baker's colleagues have looked down on the spirit. "But I do appreciate a lot of vodkas," he says. He seeks ones with briskness and no bite or strong aftertaste. "The beauty of vodka is its cleanliness." But that doesn't mean that the spirit has to lack character, even at a low price point.

Charles Joly, founder of Crafthouse Cocktails and a spirits tasting judge at the San Francisco World Spirits Competition and the International Review of Spirits Competition, says “Vodka is actually a fun category. It does take a bit more practice to pull out the nuances at times, but you'll be training your palate well." A great, affordable vodka, he suggests, is subtly creamy and aromatic, finishing in "a clean exit that doesn't leave your lips on fire" but is mouthwatering enough to leave you wanting more.

Below you'll find our experts' top picks for the best cheap vodkas to drink right now, and, no doubt, leave you wanting more.

Made using Icelandic glacial water filtered through 4,000-year-old lava rock and run through high-copper Carter-Head stills heated by geothermal power, Reyka is "the cleanest vodka I know," says Baker. Light-bodied with a hint of mineral-water flavor and silky wheat notes with a steely, slate-like finish, it's a sustainably produced spirit that delivers a brisk, immaculate kick.

Produced at California's former Naval Air Station Alameda, this vodka is the amalgam of two different spirits: one wheat-based, column-distilled vodka and one made from viognier grapes run through copper pot stills. The blended result delivers the perfect balance between mellow sweetness and savory, punchy spice. It's flexible enough for mixing clean, dirty, wet or dry for a range of martinis to please every drinker.

Read Next: The Best Vodkas

Made from native Colorado Rio Grande russet, Chepita and Lady Claire potatoes grown at high altitude in the distillers' own fields, this farmstead spirit from the Rocky Mountains is the first spud-based vodka that Tony Abou-Ganim, author of Vodka Distilled, reaches for. Distilled only once to accentuate the raw material's "funky, earthy, vegetal" flavor, it's a big, bold sip.

With its "bit of savoriness" and super-clean finish, this vodka is "just lovely to sip on," says Baker. Russian-born mixologist Slava Borisov, who heads up the bar at Travelle at The Langham in Chicago, agrees. Made with Siberian artesian well water; triple-filtered through birch charcoal, silver, and quartz; then rested for a month before bottling, this spirit epitomizes the Russian expression, "as clean as a teardrop"—a compliment reserved for only the highest quality vodkas, says Borisov.

Abou-Gamin finds more black pepper, while Baker notes white pepper and dried red pepper flakes in this bristling—but not too intense—flavored vodka. It's an easy bottle to use for a brunchtime Bloody Mary—even an elemental one. "You can make the drink and not put any additional spice in it, and this vodka will add mild heat," says Baker.

Baker declares this flavored vodka made with organic Midwestern corn and cucumbers "absolutely amazing" for a "summery, light, refreshing, clean" cocktail. It offers subtle vegetal flavor, a creamy mouthfeel, and an herbaceous finish that makes it great with a splash of tonic on the rocks, or as Baker likes to use it, in a Tom Collins.

Read Next: The Best Flavored Vodkas

Made by earth-friendly distillers, the official vodka of NASCAR is "rich, full-bodied, and sweet with a mouthfeel that's very buttery," says Baker. "It actually reminds me of a Tennessee whiskey." That said, it's also vodka, so this corn-based spirit is distilled six times and remains unaged for a clean, fresh taste and a smooth finish.

Five centuries of distilling has yielded this superlative spirit named for the bison ("zubr" in Polish) that graze on the grass that infuses the bottle. The herbaceous flavor "isn't overbearing," like it can be in other such vodkas, says Baker. "It's subtle, very pleasant, and mildly reminiscent of a pine forest." Medium in body and dry, it's a winner, Baker notes, in a martini sweetened with a touch of simple syrup.

“I love seeing how terroir has an influence on the final product,” says Borisov of this single-estate vodka. Distilled three times and filtered twice, it is made from artesian well water and indigenous Dankowski Gold rye sourced from a farm near Poland's Smogory Forest. "It's bold and robust," says Tony Abou-Ganim, without sacrificing its silky, smooth mouthfeel.

Made on the wild and remote coast of California's northern reaches, this vodka is distilled from organic sugar cane with no additives whatsoever. It offers rich, lush flavors of sweet orange and cane syrup with a slight hint of vanilla, making it a great choice for a Greyhound or Screwdriver mixed with fresh citrus juice.

Read Next: The Best Cocktail Books

Borisov lauds this vodka because it is "extremely refreshing and remains flavorful even after batching with other ingredients." Made with non-GMO grain, natural essences, and zero additives, it's low in calories and alcohol, making it a "smooth, friendly spirit" for warm-weather highballs."

Joly calls it a "rock-solid product" from a family-owned company that is "very involved in supporting the bartender community and works heavily on sustainability issues."

Best for a Moscow Mule: Tito’s

The first craft vodka produced in the U.S., this 23-year-old spirit made in Austin, Texas offers deep, rich corn flavor. Baker notes its buttery mouthfeel. Tony Abou-Ganim says that its "grainy sweetness" reminds him of cornbread. The vodka has an earthiness, he declares, that makes it work wonderfully with ginger ale or ginger beer in a Moscow Mule.

Read Next: The Best Gifts for Vodka Lovers

A blend of citrus—lemon, lime, grapefruit, and mandarin orange—but no added sugar goes into this bright and juicy classic. Abou-Gamin calls Absolut Citron a "credible and consistent benchmark” of the flavored vodka category. It's many bartenders' go-to bottle for a Cosmopolitan, but it's also delicious in a Lemon Drop or a clean, dry martini with a twist.

Betsy Andrews has been writing about wine and spirits for two decades. While reporting for Food & Wine and Travel & Leisure, she spent quality time in Jalisco’s agave fields watching piñas be harvested, and in distilleries watching them be rendered into the elixir that is tequila. Drinking at the side of master distillers, crawling the bars of Guadalajara and Tequila, she acquired a taste for, and a keen interest in, Mexico’s premiere spirit—especially the añejos and extra-añejos, which are always how she likes to end a meal. 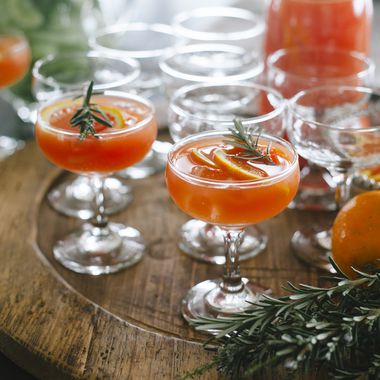