You bought a spirit or liqueur because a cocktail recipe called for a very minute amount. Now you’re stuck with the remaining 9/10ths of the bottle and what to do with it. No worries. Top bartenders weigh in with tips and recipes for getting every last drop out of an underutilized ingredient so it doesn’t gather dust on your bar shelf.

The Italian word amaro may translate to “bitter,” but the booze category by this name is much more multifaceted than the word might imply. Produced by macerating roots, herbs, bark, flowers and/or citrus peels in wine or a neutral spirit like brandy, tweaking the taste with sugar and leaving it to steep and age in cask, amaros by and large are actually bitter and sweet, not to mention packed with nuanced flavor.

The style dates back to the 19th century, when apothecaries bottled proprietary elixirs to treat nausea, indigestion and other digestive ailments. Amaro is still often consumed after a large meal to counter overindulgence, but it’s also imbibed because it’s simply delicious.

Averna is a member of the amaro category, invented by Salvatore Averna in 1868 and produced in Sicily. Viscous and easy on the palate, it’s a kind, gentle style with plenty of versatility in cocktails. You may have grabbed a bottle a few years ago when Black Manhattans were all the rage, but there are plenty of other uses for it.

Meaghan Dorman, the bar director at Dear Irving and The Raines Law Room in New York City, says Averna works on its own as well as in comforting nightcaps—a quality not seen in many amari. “The elements of bitter and candied orange peel shine through as well as pleasant caramel and earthy notes to ground the sweetness,” she says. She recommends balancing its viscosity with acidity or dry elements like sherry.

At The Raines Law Room, the Across the Pacific mixes Averna with lime, orgeat and two kinds of Jamaican rum, served over crushed ice and garnished with a lime wheel and grated nutmeg. Dorman also suggests splitting the amount of sweet vermouth in a Manhattan with Averna. In addition, she says, “I find it has darker botanical notes like sage, rosemary and juniper so it plays well with gin in a more-bitter Martinez riff.”

The liqueur’s herbaceous and bittersweet character leaves room for citrus and a strong booze like rum or whiskey, says Daniel Warrilow, the Italian portfolio ambassador for Campari America, Averna’s parent corporation. He pairs it with lemon soda to make an Averna Limonata.

“To me, Averna has a lot of cola-like qualities with a hint of orange,” says Stacy Swenson, the creative drink specialist at Simple Serve, a spirits, cocktails and strategy team. She makes a simple Averna Highball with sparkling water over ice, garnished with an orange wedge. The spirit’s affinity for egg whites or whole eggs makes Averna a perfect spirit in a Sour, Fizz or Flip, as well as in drinks including coconut, coffee, cream, fresh herbs such as rosemary or thyme, and dried fruits like cherries or figs.

“Use Averna in place of whiskey in classic cocktails for a lower-ABV alternative that still has a bold flavor,” says Swenson. One of her favorite uses is as the base in an Averna Cobbler, along with sweet vermouth, lemon and black cherry marmalade, garnished with mint, blackberries and cracked black pepper. “Like most spirits and bitter things, amaro is an acquired taste,” she says. “If it’s too harsh on its own, try lengthening it with club soda or using it as a modifier.” 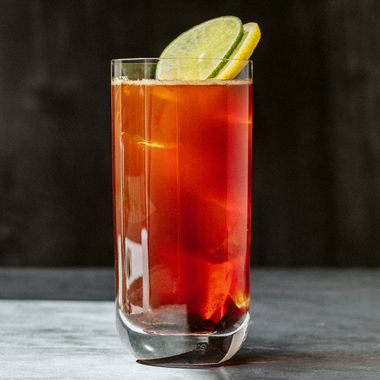