Victoria Chow is a force of nature—cheery, welcoming and incredibly gracious but a force of nature nonetheless. Her bar, The Woods, has morphed into one of Hong Kong’s hottest drinking hubs and includes The Lodge, an eight-seat bar-within-a-bar serving wildly inventive cocktails. She also oversees The Annex, a separate store and tasting room located down the street and, in her free time, KWOON, her very own line of canned craft cocktails.

Chow’s interest in the adult beverage industry began with a helpful push from her father. “I’ve always been intrigued by booze,” she says. “It started with my dad encouraging me to sniff wines since I was a little kid. As a game, I would name the aromas.”

She attended college at UC Berkeley and took advantage of her locale with frequent trips to California’s Napa Valley. Upon returning to Hong Kong, she took a job at an events agency before her dad gave her another nudge, encouraging her to study Wine & Spirits Education Trust (WSET). “This is where ‘the calling’ came,” says Chow. “I realized that people in Hong Kong had a good understanding of wine but nothing at all about craft beer and cocktails, which was what the rest of the world was interested in at that given moment. I diverted my attention to both and honed in on the cocktails. I just can’t get enough of anything cocktail- or spirits-related.”

Chow’s first solo project was The Woods. “I am very lucky I had the support of some crazy investors and family who believed in my ideas and predictions—that the cocktail industry in Hong Kong and Asia in general was about to take off and that we needed to be the ones to lead it,” she says. “We really took a stab in the dark, and I was quite fearless back then, as it felt like I had nothing to lose.”

Chow jokes that her fearlessness has since been zapped a bit by the realities of the industry, not to mention challenges such as Hong Kong’s notoriously high rent for bars and restaurants. It hasn’t stopped her, though, as The Woods came to life after nine months of careful planning with meticulous attention to detail for every facet of the concept and space.

“I teamed up with my operations manager and right-hand man, Alex Pun, who brought his experience of managing nightclubs, and I brought the design aesthetics and creative elements to put together an artisanal cocktail bar and challenge ourselves to something completely outside of our comfort zones,” says Chow. “We did a lot of research and recipe testing and at one point even threw out an entire menu and concept after over a month of development, because we felt like it just wasn’t working. There was something so raw and bootstrapped about that whole experience. Looking back, I wouldn’t have changed a thing.”

Her hands-on approach paid off as The Woods quickly thrived. The bar has become a high-volume hot spot that can get crowded during peak times, which is why The Lodge is so important for Chow. “These eight seats are for experimenting with cocktails and concepts that are not quite suited for high-volume service,” she says. “They require explanation and interaction with the bartenders to execute optimally.”

As an example, consider her showstopping Martini Constellation drink, a hanging mobile of carefully balanced Martini garnishes swirling above the glass. “It’s one that blends the idea of art and cocktails by pairing drink and sculpture, without clear indication of which inspired which,” says Chow. “I had in my mind a mobile much like Alexander Calder’s iconic ones, holding the condiments for a Martini gently moving in the wind. I just had to make it.”

What’s in the glass is just as inventive. Inspired by advice from chef Rene Redzepi, Chow dove into the world of lacto fermentation and uses bar scraps to create a cocktail brine for a Dirty Martini riff. “I throw all the bits and ends of fruits and vegetables cut for garnish and staff meals into a salt solution, let it evolve and use that brine in the Martini,” says Chow. “This means the drink is ever-changing, depending on what we add to the brine solution during the week.”

The myriad projects Chow is involved with come back to a similar starting place. “They all feed off each other and share the same ideas and ethos,” she says. “We just keep finding new ways to get good drinks into people’s lives in a meaningful way.”

When that passion was redirected into education, The Woods’ Annex became the result. “I made it a mission to spread the gospel of good booze,” says Chow. “The Annex’s mission is to help connect the dots, and hopefully guests walk away from the tasting with a more open mind and understanding of what they’re drinking.”

Chow often finds herself traveling the globe and adding to her collection of unique spirits, bringing them back to offer in tastings. If you say you don’t like tequila or gin, she’ll try to convert you by showcasing her favorites along with unique and unexpected examples. If you’ve never had mezcal, she’ll offer you a tutorial. The Annex welcomes bartenders and restaurant staff from across the city for tastings, along with consumers and small groups simply looking to try something new.

In a tiny back room of The Annex is the headquarters for KWOON. “KWOON is a true example of necessity being the mother of invention,” says Chow. “We cater cocktails to a lot of off-site events for luxury brands and eventually started getting requests to serve 200-plus guests regularly for large gatherings.”

Prebatching drinks was a logical choice, which turned into experiments with bottled cocktails and, finally, the more durable and flexible solution of canning. Rather than building this slowly, a regular client of Chow’s placed the company’s first order for 10,000 canned cocktails, due in less than a month for the holiday season. “Before this, we hadn’t even batched more than 10 cans at a time and were still playing around with flavors and figuring out shelf stability and carbonation,” she says.

Suffice it to say that trials and tribulations, and a few misadventures, ensued. Chow ended up getting the job done with the help of a few colleagues and a crazy final push. “There was no way we would complete 10,000 cans in time if we were not working 24 hours, so we did,” says Chow. “We took turns sleeping on the couch while three or four people batched, canned and labeled. It was all hands on deck, and we were absolute zombies, and soaked in cocktails, by the end of this. But we did it, and we’re better for it.”

As for the future, Chow still has plenty more she aims to accomplish, from a bar consultation project she’s involved with in China to expanding her KWOON line and bringing her spirits educational efforts to the digital space.

“I also eventually want to design a line of glassware, because that has always been a dream of mine,” she says. And you’d be crazy to doubt her. 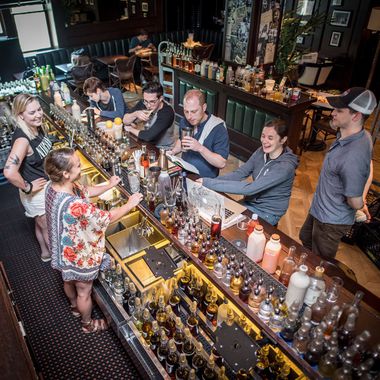