With a deflated look upon his face and his hands waving in the air, as if the concept might be physically within reach, Charlie Brown bellows the question in the classic animated holiday movie “A Charlie Brown Christmas”: “Isn’t there anyone who knows what Christmas is all about?!?”

The holidays are thick with it—back-to-back, head-to-toe, day-and-night commitments, be they the plight of partying, voracious volunteering, slogging through a pile of cards to get them in the morning mail or traveling miles to see people you only lay eyes on once a year. You just can’t help it. You try and you try hard. And that is why the Tom & Jerry is the kind of cocktail that can only exist during this most exhausting of seasons.

“I was working with Dale DeGroff in 1999, and it was that Christmas that he put the Tom & Jerry on the menu,” says Audrey Saunders, the owner of New York City’s iconic Pegu Club, where the Tom & Jerry has been made every year since the bar opened in 2005. “He placed this beautiful porcelain bowl on the back bar, and I can distinctly remember asking him what a Tom & Jerry was.”

DeGroff shared his recipe with then-green Saunders and entranced her with its Jerry Thomas history. In his book “Imbibe! From Absinthe Cocktail to Whiskey Smash, a Salute in Stories and Drinks to ‘Professor’ Jerry Thomas, Pioneer of the American Bar,” drinks historian David Wondrich credits Thomas for making the Tom & Jerry popular in the mid- 1800s.

However, his digging turned up a few articles that made reference to the drink before Thomas was even born, so while it’s convenient to pin the name to Thomas’ own (and apparently two pet white mice he fondly referred to as Tom and Jerry), it’s more likely that the batter-based drink came into existence in the earlier part of the 19th century. Either way, from the moment Saunders first laid eyes on it, she was entirely hooked. “It’s a magical drink for me,” she says. “I think of it as a liquid gift for our guests.” 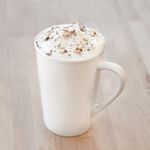 And what a decadent gift it is, requiring pounds of sugar, the separating and whipping of multiple eggs, a cartful of spices, the rich, heady addition of both cognac and rum, the simmering of milk and the heating of mugs. But the resulting cloud of spicy, warm booziness can make even the most winter-averse person melt at the prospect of a mugful.

The Tom & Jerry is a lot like a live Broadway performance: Sure, there’s a script and blocking and rehearsals, but every night it’s fresh. Every night, the batter has to get whipped and re-whipped. Every night, it’s a little different.

“What I love about this cocktail is that it incurs a culinary side as well as a spirits side,” says Adam Jed, of Bluestem Brasserie in San Francisco, who spent the last decade making the Tom & Jerry for his in-laws and just this year took the plunge to ladle it into warm mugs for his customers from early November through the end of December.

That culinary side helps Saunders to mete out the procedures into tasks that can easily be broken down. “It’s not about stability,” she says. “It’s more about logistics.” Two minutes to assemble her mise en place of food processor, container, spatula, sugar, spices, Angostura bitters, vanilla and eggs; two minutes to crack and separate the egg yolks and whites; two-and-a-half minutes to run the egg whites in a food processor and transfer to a bowl; one minute to process the egg yolks in the food processor until they’re thin and runny; and two-and-a-half minutes to continue to run the egg yolks and incorporate the sugar, spices, rum, vanilla and Angostura bitters, alternating between adding one cup of sugar at a time and some of the liquid ingredients.

H. Joseph Ehrmann has been making the Tom & Jerry for several years at Elixir, the 100-plus year old bar in San Francisco that he took over and renovated in 2003. “I’ve always been an Eggnog freak, but when Tony Abou-Ganim turned me onto the Tom & Jerry, I got completely fascinated with it and tried to perfect it,” he says.

Part of that was using his culinary background to draw a parallel between the sweet, creamy taste of the milk in the café con leche he loved so much in Spain and homing in on that similar characteristic for his version of the Tom & Jerry. “They don’t steam their milk in Spain,” he says. “They warm and froth it. Steam thins it out with water.”

The Tom & Jerry is no one-and-done type of drink. Making it in batches is necessary, and more often than not that means batches large enough to accommodate at least a dozen single-mug servings. But Saunders’ experience with the drink has perfected the technique for nightly near-bottomless crowd-pleasing. 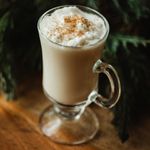 “I’ve been making Tom & Jerrys for close to 20 years now,” she says. “Everyone is so worried about maintaining the loft of the batter, but here’s a little secret: The batter doesn’t need to be stable at all. It turns out it’s easier to work with once it collapses.” In fact, Saunders says, once the batter deflates, it’s easier to get your whisk to the depths of the mixing bowl and reincorporate all the flavors.

Another secret? Don’t bother with the old porcelain bowl and mug sets, which are impractical. “Who in their right mind is going to expose egg batter out in the open to fester at room temperature? I want mine to come directly out of a fridge,” says Saunders, who stores her batter in flip-top Mason jars. (For safety reasons, Saunders suggests sanitizing all cylinders and countertops that came into contact with raw egg batter immediately after use.)

Saunders cautions that the batter should be refrigerated immediately after preparation and never be allowed to sit out at room temp. “It should be stored at no higher than 41 degrees,” she says. “Once prepared, the refrigerated batter should only be used for 48 hours at the maximum, and if there’s any leftover after that point, chuck it.”

Not that leftovers are usually much of a problem. “People order it again and again,” says Jed. “I’ve been asked if the batter can be added to someone’s coffee or added to hot cocoa instead of just milk. It’s a really, really happy drink. And I feel now more than ever we need happiness.” 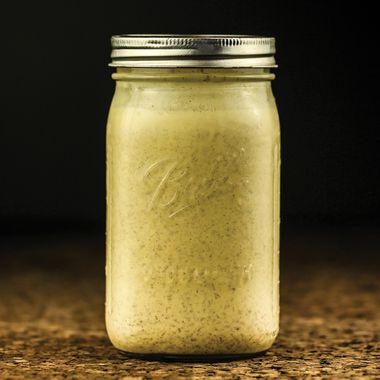